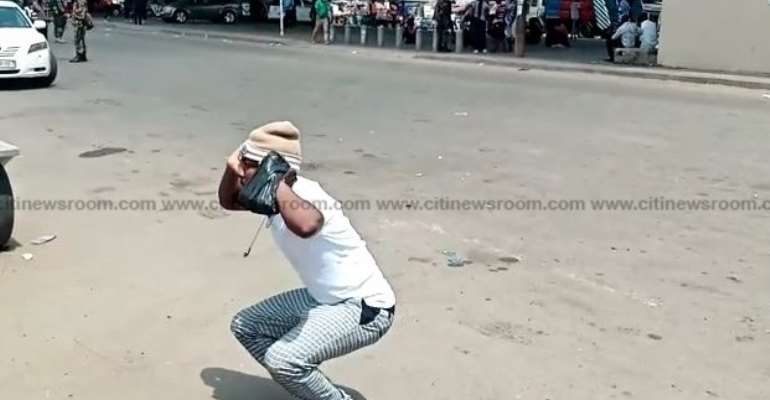 The Commanding Officer for the 64 Infantry Regiment of the Ghana Armed Forces, Lieutenant Colonel Appah says efforts are being made to find the officer who abused a resident of Kasoa by making him undertake several frog jumps on the streets.

The incident occurred in the early hours of Monday, March 30, 2020, at Kasoa which is part of the areas under lockdown as part of efforts to stop the spread of COVID-19 in Ghana.

Lt. Col. Appah told Citi News’ Calvis Tetteh that the appropriate sanction would be meted out to the officer if he is found.

The video of the incident, which has been circulating on social media since morning captures a hooded military officer commanding the civilian to move onto the main road to do frog jumps as punishment allegedly for taking a video of them while on duty.

Lt. Col. Appah said it will be a daunting task searching for the erring officer because he was hooded in the video and the area the video was taken from had about 50 uniformed personnel stationed there.

“I saw it [the video]. I want to believe [it is one of my men] because when I look at the background, it looks like our area… The soldier was wearing a hood and it is difficult to identify him in the video. Incidentally, our area is a reserved place where we have our headquarters. We have about 40 to 50 soldiers there. So it is difficult to identify which soldier did that. But I’m still looking for him to find out why he did that and give appropriate sanctions,” he said.

Giving his assessment on the compliance level of the lockdown in the area, Lt. Col. Appah said although there were fewer people in the area allowing for natural [physical] distancing, many people were still attempting to move out when they had no essential activity to undertake.

He said some others involved in petty trading were seen attempting to come out to hawk.

“Some of them, they just want to come and look at the soldiers and armoured cars. When we get them, we make them sit down for about 30 minutes and get them to go home,” he said.

He further warned that officers will adjust their modus operandi and more strictly enforce the lockdown.

Ashanti Region Has Most Completed SHS Projects — Napo
2 hours ago