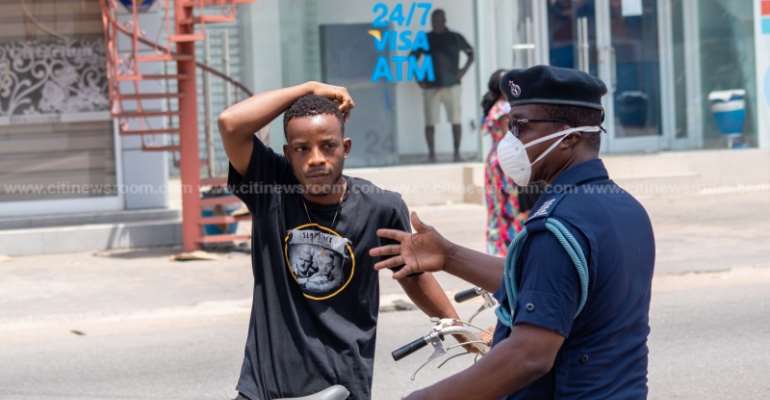 The two-week partial lockdown begun and there were more padlocks more than people in some of Accra’s business areas as Areas like Kantamanto and Makola, which record brisk activities during normal business days were virtually empty today.

For a large stretch, the area known for the sale of new and used clothing, shoes, bags and others, was deserted save for a solitary pharmacy.

Per the guidelines for the lockdown, only persons involved in the food value chain will be able to operate in markets during the lockdown period.

This order was largely complied with, with only persons selling foodstuffs, aside from other essential professions like banks, operating.

This meant some traders and hawkers tried to make a living despite the minimal human traffic.

Public transport was among other sectors hit hard by the lockdown.

Aside from being mandated to reduce their passengers, the taxis and trotros making rounds were not even getting passengers.

In addition, shops that benefited from human traffic around trotro stations were closed despite the fact that a lot of them normally sell food items.

Of concern to the few people who were in the central business district especially was the level of filth exposed by the lack of human traffic.

Though there were a few rubbish collection trucks moving around the city, there was still rubbish on major streets in Accra around midday.

Some of the heaps of rubbish looked like they were multiple days old.

Generally, police and military presence was minimal in some of the normally busy parts of Accra with no checkpoints sighted around places like Makola, Nkrumah Interchange and Madina.

But there was a significant police presence in Osu around Oxford Street which was relatively busy because of the banks and eateries on the stretch which are still allowed to operate despite the lockdown.

They were stopping pedestrians, cyclists and motorists to make sure there were no persons breaching the lockdown rules.

For the next few weeks, those exempt from lockdown can expect to enjoy stress-free journeys to work.

Roads in the central business district, Madina Zongo junction among others which were notorious for gridlock during peak hours were almost empty.

There normal commotion at some of the capital’s busiest bus stops was absent.