By Julia Selman Ayetey - The Conversation 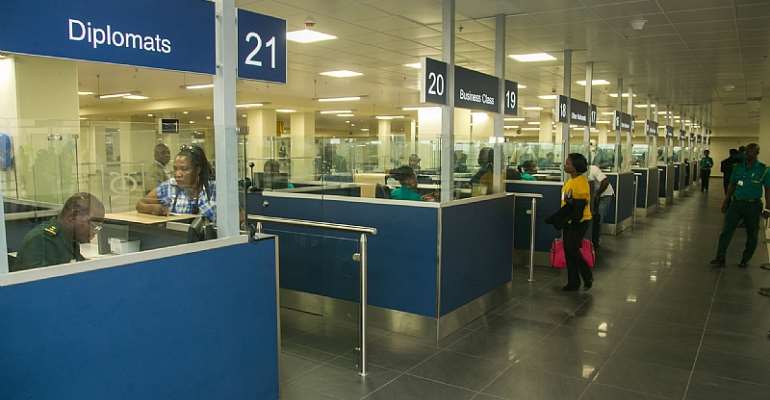 Making Ghana a regional and international aviation hub was one of President Akuffo Addo's objectives upon taking office in 2017. There has been much progress: the Kotoka International Airport in Accra was ranked number one in 2019 for airports receiving between 2 million and 5 million passengers by the Airports Council International, winning the Airport Service Quality Award . Beyond the $275 million investment in Kotoka Airport, the Kumasi, Tamale and Sunyani airports are also benefiting from major improvements to infrastructure.

This aviation ambition is linked to the creation of jobs. It is also strongly linked to the National Tourism Development Plan , which aims to achieve 8 million tourists per year by 2027. Most of them will arrive in the country by air and they are expected to contribute over $8 billion to the economy.

In line with these plans, 2019 brought large numbers of African-Americans, including many celebrities, as well as others from the diaspora to celebrate the Year of Return . The minister of tourism, arts and culture, Barbara Oteng-Gyasi, stated that the year-long programme provided Ghana with an economic boost of almost $2 billion .

The present COVID-19 pandemic will undoubtedly impede the country's aviation ambitions. Like most other countries, Ghana has imposed travel restrictions in an attempt to reduce transmission of the virus. This is despite the International Health Regulations aim of minimising disruption to travel during health emergencies.

Read more: Perspectives from Kenya and Ghana on coronavirus preparations

The ministry of information released a travel advisory indicating that from 17 March 2020 the only people permitted to enter Ghana were Ghanaians, people with Ghanaian residency or people from countries with fewer than 200 COVID-19 cases.

Consequently, airlines suspended or reduced their flights to Ghana. Emirates Airlines, for example, announced it would cease flights to the country until at least 20 May. Delta Airlines and KLM also temporarily suspended flights to the country. At the time of the travel advisory, the director-general of the Ghana Civil Aviation Authority, Simon Allotey, estimated that COVID-19 would reduce revenue by 20% for the Ghanaian aviation industry.

Given the dynamic nature of the pandemic, government policies are changing rapidly. On 21 March the government announced that from 23 March 2020, all borders – land, sea and air – would be closed to people for at least two weeks.

The new travel restrictions mean that there will be no demand for commercial flights. The previously predicted 20% reduction is now likely to be significantly more.

A 2018 ministry of finance report showed that the Ghana Airport Company Limited collected revenue of GHȼ475.56 million through airport taxes alone. This was a more than 35% increase from the previous year. The reduction in flights and visitors caused by the pandemic will reduce revenue from aeroplane landing fees, fees for using Ghana's airspace, and other charges such as the passenger safety charge.

Where foreigners are stranded in Ghana, the aviation industry will also suffer economic loss if airlines are required to provide food and accommodation, refunds or compensation as per, for example, the Consumer Protective Ghana Aviation (Economic) Directive 2019 .

Ghana's aviation industry has more than 20 aviation operators and includes those employed in the servicing of aircraft, management of airports, air traffic control operators, ground handlers, airport security and immigration and customs. The temporary cessation of flights and post-COVID-19 downward economic projections put their jobs at significant risk.

The knock-on effects to the wider economy are also of concern.

No aviation, much less commerce

Aviation is crucial to international business, trade and tourism. Though there are currently no plans to halt cargo planes, the lack of passenger flights into the country will delay business deals and halt goods and funds brought by visitors, which often sustain local families for several months.

The hospitality industry has not gone unscathed. Some hotels have already started to lay off workers as there has been a steep drop in bookings. Convention centres have had international conferences cancelled. Restaurants have also seen a decrease in patrons.

Since the start of the outbreak, African airlines have already lost more than $400 million. With no national welfare system, many Ghanaian citizens will be affected by the lack of air transport into the country.

Measures to mitigate the loss of jobs and financial loss are needed. The Bank of Ghana has introduced policies which should provide more liquidity and increase lending. Elsewhere in Africa, the Central Bank of Mauritius has introduced a COVID-19 financial support package and similar measures are being considered by the South African government.

Canada has approved a $27 billion economic response plan . The US government has approved a stimulus package of $2 trillion , which includes $32 million in grants for passenger and cargo airlines and contractors who provide aviation services such as catering and aircraft cleaning. The package also provides for more than $25 billion in loans to the industry.

The UK has so far avoided providing specific financial assistance for the aviation industry. But the Ghanaian government is facing increasing calls to implement a stimulus package for specific industries, including aviation, to cushion the economic impact of COVID-19.

Ghana implemented travel and safety measures early in an attempt to prioritise public health and security while minimising damage to the economy. COVID-19's full impact on Ghana's aviation industry, while still unknown, will definitely make its development ambitions more challenging to achieve.

Julia Selman Ayetey does not work for, consult, own shares in or receive funding from any company or organisation that would benefit from this article, and has disclosed no relevant affiliations beyond their academic appointment.