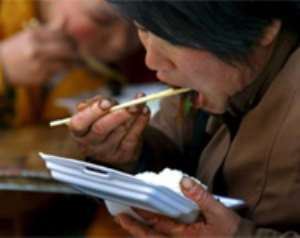 The Japanese may have to find an alternative way to grab their sushi after China imposed a tax on disposable chopsticks in a bid to improve its environmental record.

In a move that has cheered environmentalists but worried restaurant owners, China has slapped a 5% tax on the chopsticks because of deforestation concerns.

The move is hitting hard at the Japanese, who consume 25 billion sets of disposable wooden chopsticks a year - about 200 pairs per person. About 97% of them come from China.

Chinese chopstick exporters have responded to the tax increase and a rise in other costs by slapping a 30% hike on prices of chopsticks exported to Japan - with a planned additional 20% hike pending.

The increase has sent Japanese restaurants scrambling to find alternative sources for chopsticks, which are called "waribashi" in Japanese

Ichiro Fukuoka, director of Japan Chopsticks Import Association, said: "We're not in an emergency situation yet, but there has been some impact."

A pair of waribashi that used to cost a little over 1 yen (less than $0.01) is now 1.5-1.7 yen. Industry officials said the rising costs of raw wood and transportation because of higher oil prices have also contributed to the rise.

Japanese newspapers Mainichi and Nihon Keizai reported that China is expected to stop waribashi exports to Japan as early as 2008.

Convenience store operators try to cushion the impact by cutting cost in distribution and transportation.

"We provide chopsticks only to customers who ask for them," said Mayumi Ito, a spokeswoman for Seven & I Holdings Co, owner of 7-Eleven convenience stores.

Disposing of the disposable

Disposable chopsticks produced by domestic makers accounted for half of the market share until about 20 years ago, but were taken over by cheaper, high quality Chinese counterparts, mostly produced by Japan-China joint ventures.

About one-third of Chinese chopsticks go to Japan and South Korea, while most of the remainder are used locally, according to China's Jiefang Daily.

Environmentalists see the development as a chance to get rid of disposable chopsticks, which have been linked to deforestation and a wasteful lifestyle.