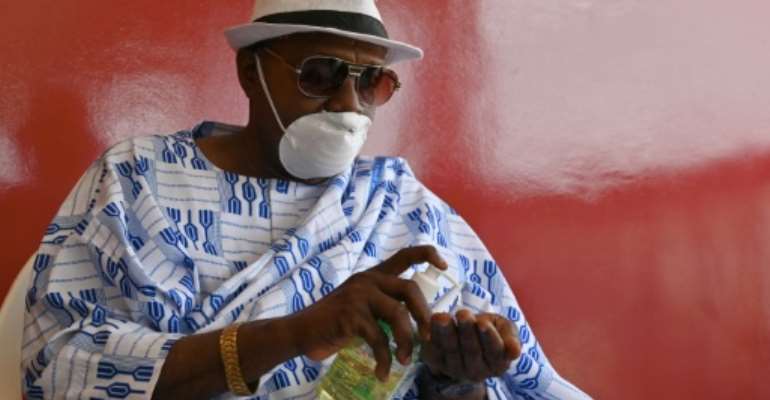 Follow my lead: King Nanan Ako Ako Omer at a meeting with advisers on the coronavirus pandemic. By ISSOUF SANOGO (AFP)

"Good day, this message is about the coronavirus. It is a very dangerous disease," warns a voice relayed by loudspeakers around Azaguie-Ahoua, a small town in southeastern Ivory Coast.

"Let's keep our distance -- one metre (3.25 feet) apart," the voice says, speaking first in the local Abe language and then in French.

The voice belongs to Gustave Aguie Ahouasso, a "griot" -- a traditional storyteller -- whose duties include preserving oral history and serving the king of Azaguie, Nanan Ako Ako Omer.

It is the chief himself who has ordered the anti-coronavirus messages to be broadcast over the 15 loudspeakers in the town, a community of 10,000 souls.

"The system replaces the street criers of old," said Ahouasso.

The coronavirus announcement -- and the chief's command -- give the advice special impact.

"The chiefs here have found a great way to communicate via the loudspeakers. It avoids contact (through public gatherings).... The message gets across. We follow instructions", says Genevieve Akoua Kouassi, a primary-school teacher out shopping at the market.

Recent royal communications have above all aimed at making townspeople aware of the health messages about coronavirus, with twists to suit rural African life.

One warning, for instance, is not to eat wild animals -- bushmeat -- that could be a potential source of disease.

"We listen to the messages from the loudspeakers. Today, they repeatedly told us that everyone must be back in their home after 7:00-8:00 pm," said Francia Nadege Apo, a hairdresser whose salon consists of two stools at the side of the street.

"The loudspeakers help us, but we are afraid," she adds.

Closed: Shops are shuttered at the popular Adjame market in Abidjan. By ISSOUF SANOGO (AFP)

On Sunday, Ivory Coast announced its first death of coronavirus, out of 165 detected cases.

A 9pm-5am curfew, announced on March 23 by President Alassane Ouattara, has been enforced along with a ban on movement in and out of the economic capital Abidjan and closure of bars, schools and restaurants.

Ivory Coast has retained hundreds of kings and traditional chiefs, even though the former French colony became a republic six decades ago this year.

These local rulers operate in parallel with the country's political government, in a system that predates colonial rule.

The word of these traditional rulers weighs heavily -- not only in numerous local decisions but sometimes at the national level.

In 2016, a new constitution created the National Chamber of Kings and Traditional Chiefs to give official recognition to their place in society along with a consultative role.

Six hundred kilometres (about 350 miles) to the north of Azaguie, the head of the village of Gbini, Aly Djodjogo Traore, addressed neighbourhood leaders from around the community of more than 3,000 habitants.

Gbini is a poor village near the border with Mali. It has no electricity and thus no loudspeakers. Public meetings take place despite the risk of the virus.

"I ask you to wash your hands with soap or with (hydroalcoholic) sanitiser, which is a product sold in pharmacies," said the chief, wearing a long, pale green robe. He patiently spoke in Senoufo, the local language, then repeated his words in Malinke for the benefit of Malians in the village.

"Go and tell people that they must avoid gatherings. We have to close the canteens, the bars where there are often prostitutes. Prayers in mosques and churches are suspended. We need to pray at home."

But the toughest tidings were yet to come for people who make a living from "dadaba", a name for artisanal gold mining.

"As of today, we stop 'dadaba' work," Traore ordered.

Young people erupted in protest, arguing that they could not live without the money, but the chief was firm.

"Those who do not respect this decision will have to leave the village."

In Azaguie, the king also wrestled with rumbles of discontent.

"We work to get the word out to avoid the virus coming here. But we need help. The simplest things are hard," he said.

"They say 'Wash your hands'. We have no sanitiser, but we have no (running) water either. How do you wash your hands without water? Should we spit on our hands?"

A woman wears a mask at a bakery in Azaguie-Ahoua. By ISSOUF SANOGO (AFP)

One of those serving the king, Maurice Boua Akoucha, said food was a huge concern.

"People speak of confinement, of staying at home. But there are no accompanying measures. What will kill more than the virus is hunger. If this lasts, what do we eat? We shall be compelled to go out."

"Africa is not Europe or China, which have resources. And even there, there have been many deaths," Akoucha warned.

"The price here will be catastrophic."