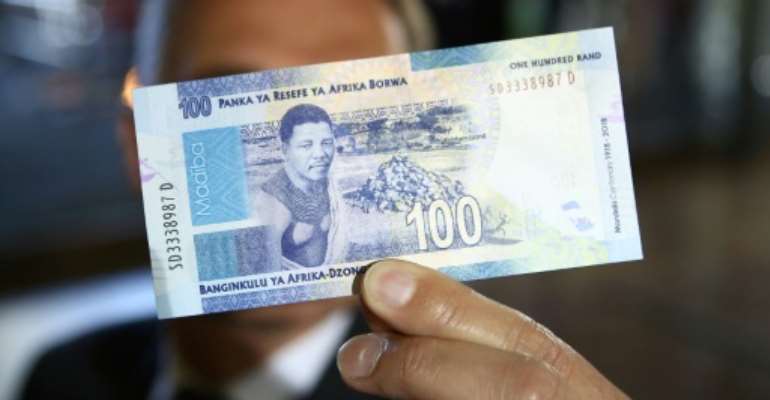 Moody's move had an immediate impacat on the rand. By Phill Magakoe (AFP)

The downturn in the currency came after the credit rating agency cut its rating for South Africa late Friday to Ba1, below investment grade, citing a "continuing deterioration in fiscal strength and structurally very weak growth".

The rand traded at 18.05 against the US dollar in Asia early Monday, but then recovered slightly to around 17.90 during African trading hours.

"The ZAR has been the worst performing emerging market currency over the past week and traded at its weakest level ever at R18.05 in Asia early this morning," said Wichard Cilliers, head of dealing at TreasuryONE, a South African private financial advisory firm.

He said the currency of Africa's most industrialised economy had now weakened 17 percent over the past month.

Moody's downgrade late on Friday came as South Africa began a three-week nationwide lockdown to try to halt the rapid spread of the novel coronavirus, which has killed two people and infected more than 1,280 people in the country.

Before Friday, Moody's had been the last of the global ratings agencies to keep South Africa on investment grade.

Two other major international rating agencies Fitch and S&P had cut the credit rating of Africa's most developed economy to sub-investment level in 2017.

The government said Moody's move "could not have come at a worse time" as it would "further add to the prevailing financial market stress".

Anti-gay bill : Tell foreign missions if they provoke us we'...
7 minutes ago