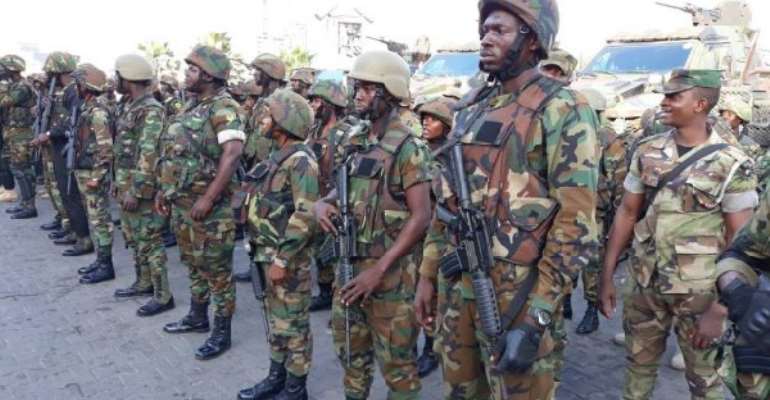 The Ghana Armed Forces (GAF) is assuring the citizenry in Kumasi that troops that have arrived ahead of the impending partial lockdown are for their protection and not to intimidate anyone.

During TV3’s 10pm new bulleting on Saturday, March 28, 2020, they run a story on their platform showing troops from Burma Camp 'purportedly threatening to cause mayhem on residents of Kumasi during the partial lockdown exercise aimed at preventing the spread of the Covid-19'.

In a statement from the Ghana Armed Forces today, they have stressed that the video which has gone viral on social media is false and without foundation.

“We wish to state categorically that the news item is false and without any foundation. Firstly, no troops have been moved from or will be moved from Burma Camp to Kumasi in connection with the impending exercise.

“Secondly, the task of the Ghana Armed Forces (GAF) is to provide security for the citizenry and not intimidate anyone.

“Thirdly, the imputed threatening statement has been found to have been deliberately doctored”, the statement signed by the Director of Public Relations, E. Aggrey-Quarshie said.

The Ghana Armed Forces is additionally seeking a retraction of the news item and an apology from TV3 for running a story they could have contacted them for verification.

“In the meantime, we urge the general public to disregard the report in its entirety and trust in GAF as a force for good”, the GAF statement concluded.

Below is the full statement from the Ghana Armed Forces: