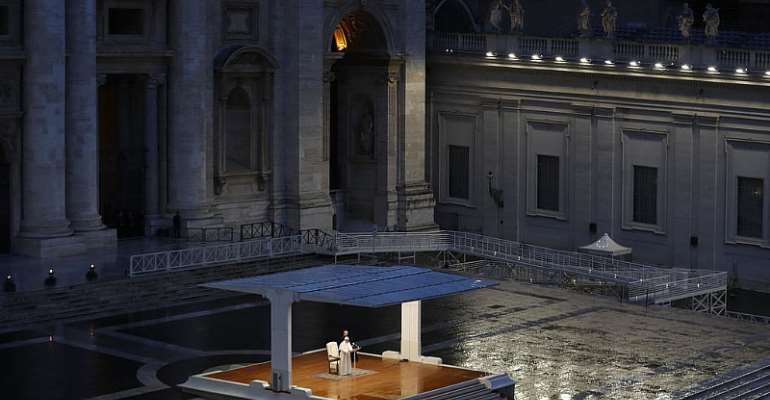 With more than 10,000 deaths from coronavirus in Italy, and a small number of infected cases in the Vatican, Pope Francis has stopped all his general audiences and Sunday blessings with the public.

These are held in the official papal library and shown on television and streamed on the Internet for the faithful to be able to see and listen to the pope' messages.

The same thing takes place every morning with the pope's mass in the residence of Santa Marta in the Vatican. In his Sunday message, the pope called for an immediate global ceasefire, backing the call made earlier this week by the United Nations Secretary General Antonio Guterres.

“I join all those who have accepted this appeal and invite everyone to follow it by ceasing all forms of hostility, promoting the creation of humanitarian aid corridors, being open to diplomacy, and paying attention to the most vulnerable,” Pope Francis said.

He noted how the appeal by Guterres was made during “the current COVID-19 emergency, which knows no borders”. “The joint commitment against the pandemic can lead everyone to recognise our need to strengthen our fraternal ties as members of one human family," the pope added.

Since the first death from the outbreak of coronavirus in Italy on February 21, the Pope has often spoken about the epidemic. On Friday he delivered an extraordinary 'Urbi et Orbi' blessing in front of an empty Saint Peter's Square urging the faithful, who at this time find themselves “afraid and lost” in the face of this epidemic, to ease their fears through faith.

Only too aware of the need for equipment in Italian hospitals, Pope Francis this week donated 30 respirators to hospitals in the northern Italian areas hardest hit by the pandemic and Spain.

Meanwhile some 170 people in the Vatican have been tested, according to spokesman Matteo Bruni. Six have tested positive including one who works in the Secretariat of State and lives in the same residence as the 83-year-old pope.

The Vatican spokesman said that Pope Francis and his closest aides have not been infected with Covid-19. He added that the Santa Marta residence has been sanitized.

Precautions against the spread of coronavirus have been taken inside the Vatican walls. An authoritative Italian newspaper reported this week that Pope Francis has been eating alone in his room for some time to avoid unnecessary social contacts. His secretaries take his meals to his room on a tray.

La Stampa newspaper added that the anti-contagion cordon has been tight around the pope for weeks, that Francis "spends much of his time in his apartment, and when he moves inside the residence, he keeps the necessary safe distances.” The pope does still meet with a handful of Vatican officials every day.

Your God-fearing attitude, refusal to tenaciously cling to p...
33 minutes ago