By Diego URDANETA and Thomas PERROTEAU with AFP bureaus 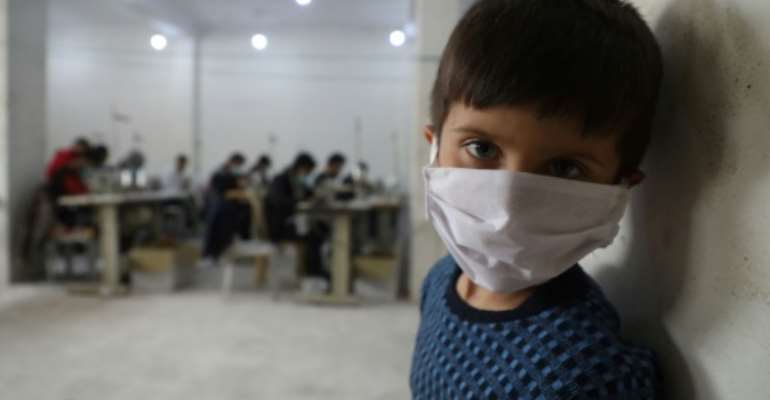 As even rich countries struggle, aid groups warn the toll could be in the millions in low-income countries and war zones such as Syria and Yemen. By AAREF WATAD (AFP)

Spain reported a national daily record of 838 coronavirus deaths on Sunday in a fresh warning to the world that long-term lockdowns may be needed to halt the deadly march of a disease that has claimed more than 31,000 lives.

A deluge of patients are overwhelming hospitals in Europe and the United States, now the focal points of a pandemic that is upending the global economy in unprecedented ways.

In the US, an about-face by President Donald Trump on quarantining New York highlighted the panic and confusion unfurling across many parts of the world trying to contain the virus.

In Spain, where the 24-hour death toll rose for the third consecutive day, lockdown measures have been tightened as officials cling to hope that slowing growth rates mean they are nearing the peak of the crisis.

COVID-19's relentless spread has infected nearly every sphere of life, from wiping out millions of jobs to postponing elections and putting a pause on the world's sporting scene.

Spain, one of the worst-hit countries in the world, has tightened a nationwide lockdown to battle the coronavirus. By CESAR MANSO (AFP)

It has also spurred a worldwide scramble for medical gear as exhausted doctors and nurses in some of the world's wealthiest cities struggle to dole out limited stocks of face masks and life-saving respirators.

From snorkel masks to 3D-printed face shields, creative solutions have popped up around the globe in efforts to plug the gap as factories rush to keep up with international demand.

But frontline medical workers in places like Italy, Spain and New York, where the crisis is already-biting hard, don't have time to spare.

"Everybody is scared," said Diana Torres, a mother of three who works in a rehabilitation centre at New York's Mount Sinai hospital group, where a 48-year-old nurse manager recently died from COVID-19.

India has also imposed a nationwide lockdown to battle the coronavirus. By Sanjay KANOJIA (AFP)

"I have nothing for my head, nothing for my shoes," she said, explaining how it took significant effort to acquire one face shield, one N-95 respirator mask and one gown -- all of which she said she must reuse.

Cities around the world have fallen eerily quiet as a third of humanity adjusts to life confined within the walls of their own homes.

Some leaders warn the worst is yet to come as governments roll out new containment measures and rescue packages aimed a staunching the bloodletting of economies everywhere.

In Britain, deaths have now topped 1,000 as Prime Minister Boris Johnson -- who tested positive for the virus last week -- warned that dark days were on the horizon.

"We know things will get worse before they get better," Johnson, who said he has only mild symptoms, wrote in a leaflet sent to all UK households explaining how to help limit the spread.

While Johnson initially said the shutdown would last three weeks, a leading expert warned it could be in place until June.

"We're going to have to keep these measures in place, in my view, for a significant period of time -- probably until the end of May, maybe even early June," Professor Neil Ferguson of Imperial College London, one of the epidemiologists advising the government, told the Sunday Times.

The carnage in worst-hit Italy and Spain suggests quarantine measures are unlikely to be lifted anytime soon, despite their devastating impacts on the vulnerable.

On the Italian island of Sicily, police with batons and guns moved to protect supermarkets after reports of looting by locals who could no longer afford food.

"We have no money to pay, we have to eat," someone reportedly shouted at the cashiers in a Palermo supermarket, according to La Repubblica newspaper.

Spain has toughened an already tight nationwide lockdown by halting all non-essential activities.

Iran's President Hassan Rouhani said the country must prepare to adjust to "the new way of life" for a long time, after 123 more deaths were recorded.

In the ground zero-city of Wuhan, however, life is creeping back to normal.

"Initially we were more scared and maybe thought it was safer overseas," said Han Li, who is helping process the flood of locals returning to Wuhan after having been were stranded elsewhere during the more than two-month lockdown.

"But now it doesn't seem this way. It seems it might be safer within China."

Beijing, which is revising its role in the coronavirus saga by coming to the aid of countries now on the frontlines, claims success in suppressing the virus at home.

Countries and territories with confirmed new coronavirus cases as of March 29 at 1000 GMT. By (AFP)

With the pandemic sweeping westward, the United States is home to the highest number of confirmed COVID-19 infections globally with more than 124,000 cases, according to a Johns Hopkins University tally.

As states impose a patchwork of measures, President Trump sowed confusion over the weekend by back-peddling on a proposal to impose a broad lockdown on New York and its neighbours.

"A quarantine will not be necessary," Trump tweeted eight hours after he stunned the New York metropolitan region -- the epicentre of the US outbreak -- with a proposal to place it under quarantine.

Trump's reversal came on the same day the US death toll topped 2,100, more than doubling in just three days. More than a quarter of the fatalities were in New York City.

World toll of coronavirus infections and deaths as of March 29 at 1000 GMT. By Valentine GRAVELEAU (AFP)

In Chicago, a less than one-year-old infant succumbed to the respiratory disease on Saturday, an extremely rare case of juvenile death.

Around the world more than 667,090 cases of the novel coronavirus have been officially declared since the outbreak began late last year, according to an AFP tally.

Variations in testing regimes -- and delays in some countries -- mean the true number is likely far higher.

As even rich countries struggle, aid groups warn the toll could be in the millions in low-income countries and war zones such as Syria and Yemen, where healthcare systems are in tatters.

Impoverished Mali headed to the polls with trepidation on Sunday for a parliamentary election just hours after the country reported its first coronavirus death.