'ANC Spy Bible': a real-life South African thriller, but too much left unsaid

By Gavin Evans - The Conversation 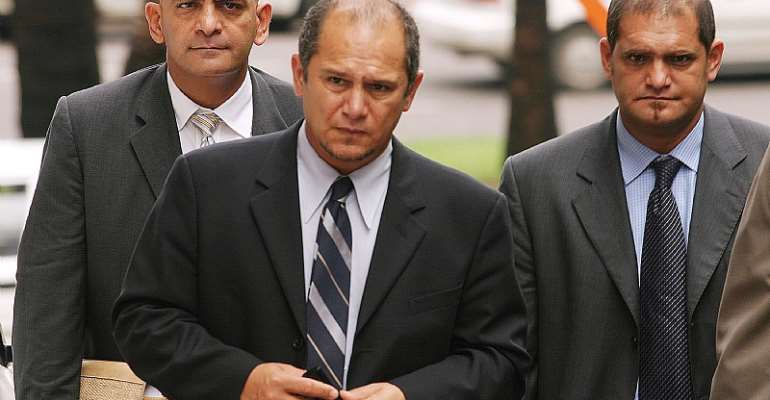 The Shaik brothers Moe, Schabir and Chippy after Schabir was found guilty of fraud and corruption and sentenced to 15 years. - Source: .Beeld/Gallo Images/Getty Images

Thirty-five years ago – and five years before the unbanning of the African National Congress (ANC) and other anti-apartheid organisations and the release of political prisoners including Nelson Mandela – a security policeman carrying a batch of documents walked into the optometry practice of a young South African in Durban on the west coast of the country. He was offering his services to the then-banned ANC. The young man he'd approached was Moe Shaik. Over the next six years 'The Nightingale' fed Shaik with vital intelligence that helped keep the ANC's underground activities against the apartheid government alive. Gavin Evans reviews The ANC Spy Bible , Shaik's story of this relationship – and its sour aftermath in the grubby politics of post-apartheid South Africa.

6am, a factory office, Fordsburg, Johannesburg 1988: I'm one of five people at a Transvaal underground leadership committee of Operation Vula , a clandestine operation of the banned ANC. We're being addressed by the ANC's National Executive Committee member Mac Maharaj who has slipped into the country incognito to set up home-based structures. He's presenting what he claims is incontrovertible evidence that the prominent struggle lawyer Bulelani Ngcuka is a spy.

I'm doubtful. For one thing, I'm no fan of Mac's – for all his courage and intelligence, he's rather too pleased with himself, something of a prima donna and way off the mark in his expectation of an insurrectionary seizure of power. More to the point, when I request evidence, he dismisses the question, insisting he has water-tight intelligence, and instructs us to inform our underground units. Instead, I check this out with struggle-linked lawyers who insist Bulelani is no spy, so I inform my own unit there's a false rumour along these lines.

Mac's sole source is Moe Shaik, the ANC spymaster of a mole within the security police who'd supplied top secret files with code numbers. Moe and Mac reached the conclusion that agent “RS452”, an Eastern Cape lawyer, was Ngcuka. Fifteen years on, when Ngcuka was public prosecutions director, this pair again smeared him, repeating the allegation. Thabo Mbeki set up a commission of inquiry which found the rumour was false . It then emerged the real spy was a white lawyer from Port Elizabeth, Vanessa Brereton .

So Moe and Mac got it spectacularly wrong and could have destroyed the life of a struggle lawyer in the process. Moe at least apologised to Ngcuka , but the passage dealing with this episode is a low point in his generally well-written memoir. He somehow manages to portray himself as the victim in this saga, blames Mbeki and is unable to bring himself to admit the obvious: 'I made a terrible mistake.'

This book, The ANC Spy Bible starts with a band of brothers – the Shaiks – who would show courage and tenacity in surviving torture and brutality in detention cells in their fight against the apartheid state. But like other South African brothers (the allegedly deeply corrupt Guptas and the Eastern Cape Watsons come to mind), some would gravitate towards Jacob Zuma and his project of state capture , with one, Schabir, getting a 15-year prison sentence resulting from his corrupt relationship with Zuma.

Moe had a spell as the country's foreign intelligence boss. But the Ngcuka affair and his brother's downfall pushed him to the fringes, giving him the time to write this book.

Moe was working as an optometrist when he was recruited into an ANC unit headed by an older brother, Yunis (there were six brothers and one sister, all very close, partly because as young children they were abandoned by their mother who died soon after). In 1985 they were tasked with smuggling an ANC leader, Ebrahim Ebrahim, into the country. But the security police got wind of Ebrahim's presence and were about to raid. It was decided Moe would be the decoy, enabling Ebrahim to escape.

So Moe ended up being detained under section 29 of the Internal Security Act , which allowed indefinite detention without trial, at Durban's security police headquarters, CR Swart Square, where he was beaten and tortured. Yunis was then captured and received an even worse beating, witnessed by a security policeman dubbed the 'bathroom officer', who later met their stepmother, Kaye, and liked her. He began to offer Moe useful nuggets of advice.

Nine months and one suicide attempt later, Moe was released, and was visited at work by the bathroom officer who was carrying a wad of documents showing deep state penetration of the ANC at every level. This is where the book becomes thrilling, with the officer, now named The Nightingale, meeting Moe in parking lots to hand over documents, which are rapidly photocopied and returned.

Soon Moe became the controller of a security police spy with a unit of helpers under his command, before being whisked off to London where he met regularly with ANC intelligence chief Jacob Zuma, followed by a spell of training in East Germany. He returned and started to feed Maharaj and Operation Vula with this intelligence.

There were scares along the way, assassinations of key ANC people and spies exposed. Eventually the security police clocked that they'd been infiltrated, causing consternation in their ranks, but, amazingly, The Nightingale was never uncovered.

Shaik writes with panache, showing an impressive memory for detail and an ability to keep the pace of the narrative, at least until the last quarter – so much so that it's easy to miss the caveats. He fancies himself as an analyst who can read people well. And yet, he has a rather large blind spot for his leaders – until they fall out with him.

Not a peep of criticism is ventured for the East Germans, nor for anyone in the exile leadership. For instance, the ANC security chief, Joe Nhlanhla, who struck me as a man of bumbling incompetence, is lavished with praise, as is Zuma, at least until he drops Shaik as an ally, well into his state capture programme. Astonishingly, Shaik suggests it is only then that Zuma goes astray, although he notes that he will never know when “precisely Jacob Zuma lost his way”.

And he can find no words of censure for Maharaj, despite his venal descent into the position of Zuma's yes-man.

And yet for all its flaws, this book is an important addition to the struggle era library. Moe Shaik and The Nightingale played a significant role in ANC fortunes in those violent years between 1985 and 1991. Moe has received his rewards. The Nightingale deserves them, and it reflects badly on successive ANC leaders that they have never honoured him.

Gavin Evans' most recent book, Skin Deep: Journeys in the Divisive Science of Race is published by OneWorld.

Gavin Evans does not work for, consult, own shares in or receive funding from any company or organisation that would benefit from this article, and has disclosed no relevant affiliations beyond their academic appointment.