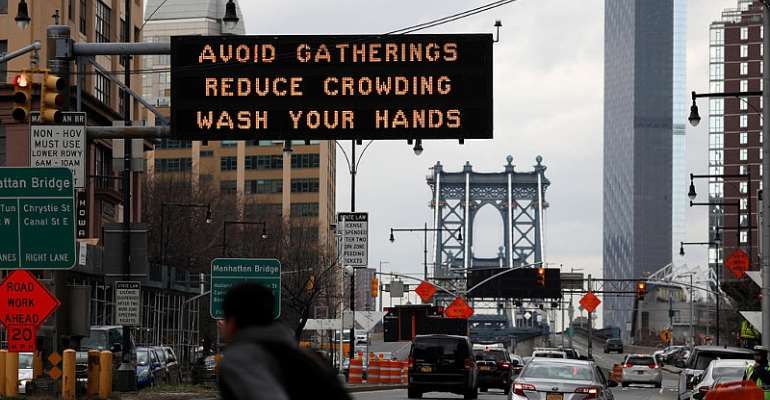 The United States has become the new global epicentre of the coronavirus pandemic, as confirmed cases surpassed 100,000. Italy on Friday recorded the most deaths in a 24-hour period since the Covid-19 outbreak began with more than 900 fatalities, as Spain also marked its deadliest day.

The number of confirmed Covid-19 cases in the US rose to 104,837, making it the world's worst coronavirus epicentre with nearly a sixth of global cases.

The grim milestone came Friday as President Donald Trump signed an unprecedented $2.2 trillion stimulus package to shore up the plunging US economy in fight to stop the spread of Covid-19.

In New Orleans, famed for its jazz and nightlife, health experts believe the month-long Mardi Gras in February could be largely responsible for its severe outbreak.

Record deaths in Italy, Spain
Italy reported a new record of 919 deaths within a 24-hour period on Friday, taking its total to 9,134.

The country has the second-highest number of infections globally with more than 86,000, ahead of China, where the outbreak began, with 81,000.

Italy has showed a continuing downward trend in infection rates and Spain said its rate appeared to be slowing, but other countries were bracing for the virus's full impact.

France lockdown extended
In France, 299 more people died from the coronavirus, down from the previous day's 365, as Prime Minster Edouard Philippe announced the lockdown would be extended by two weeks.

British Prime Minister Boris Johnson became the first major world leader to test positive for Covid-19, announcing on Twitter that he developed mild symptoms and was self-isolating. He said, however, that he would continue to lead the government's response to the pandemic.

The United Kingdom has seen more than 14,500 declared coronavirus cases and 759 deaths, as of late Friday.

There have now been more than 27,000 deaths worldwide.

The World Health Organization's regional director for Africa warned the continent faced a "dramatic evolution" of the pandemic, as South Africa also began life under lockdown and reported its first Covid-19 death.

Mankarigu Health Center temporarily closed down after attack...
21 minutes ago