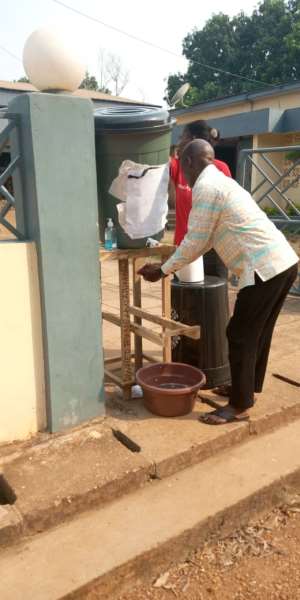 The District Chief Executive (DCE ) for Akatsi South District, Mr. Leo Nelson Adzidogah, has clashed with the Member of Parliament for Akatsi South constituency (MP), Hon. Bernard Ahiafo, over the distribution of Veronica buckets to the people of the area, to help fast track the fight Against Covid-19.

The DCE according to a statement signed by the NDC communication officer for Akatsi South, Hon. John Kobby Agbanavor has issued a caution that he would not allow the lawmaker to distribute the Veronica buckets which, he says, are "ostensibly to score cheap political points."

This is all because the Veronica buckets have been customised with the name of the MP boldly written on the front of the bucket but pictures shared by the Communication officer revealed that the DCE directed unknown person to cover the name of the MP with a paper on the buckets placed at the District Assembly.

The DCE order led to the breakdown of one of the Veronica buckets presented to the Assembly.

Some 200 pieces of the Veronica buckets procured by the MP are distributed and placed in almost all the vantage points of the Constituency in the first phase of the exercise, which is part of interventions to help residents of Akatsi practice proper hygiene.

This, according to the statement going viral on the internet, the DCE of the Area, Mr. Adzidogah wasn't happy with the MP's timely aid.

The MP, shocked by the DCE’s action and public display call on constituents to remain calm and continue with the effort to stamp out Covid-19 as the disease wears no political colour.

READ THE FULL STATEMENT BELOW.

THE DCE OF AKATSI SOUTH KICKS AGAINST THE MEASURES PUT IN PLACE TO FIGHT THE DEADLY CORONAVIRUS.

As part of measures to fight the deadly corona virus , the Member of Parliament for Akatsi South Constituency , Hon. Bernard Ahiafor, donated over 80 pieces of veronica buckets with liquid soap and face masks to the District Director for Health Services, Akatsi South.

However , it appears the DCE of Akatsi South , Hon. Leo_Nelson Adzidoga stands strongly against any attempt by the MP to help the citizens of Akatsi South from contracting the deadly virus.

It is shocking to note that the DCE is acting contrary to the directives of the president of the Republic, His Excellency Nana Addo Dankwa Akuffo Addo.

It is disappointing to note that the veronica buckets that were provided at vantage points, seems to be against the wish of the DCE who allegedly ordered for their removal. It is on record that the veronica bucket that was put near the NPP constituency party office at Akatsi was removed by a known NPP Constituency Executive Member all attempt to retrieve it proved futile.

Apart from that, the one placed in front of the District Assembly Hall was destroyed by unknown person. Shockingly the second one that was used to replace the broken one, the label bearing the name of the MP was covered due to the instruction from the DCE of Akatsi South as alleged.

The communication outfit wishes to draw the attention of the general public to this unfortunate misconduct of the DCE and his cohort for politicizing the deadly disease which knows no political colour.

Therefore, we wish to indicate that the NDC is poised to give the needed assistance and not to do politics with this deadly disease.

As a result, we are calling on the NPP to join hands with us to fight the disease.