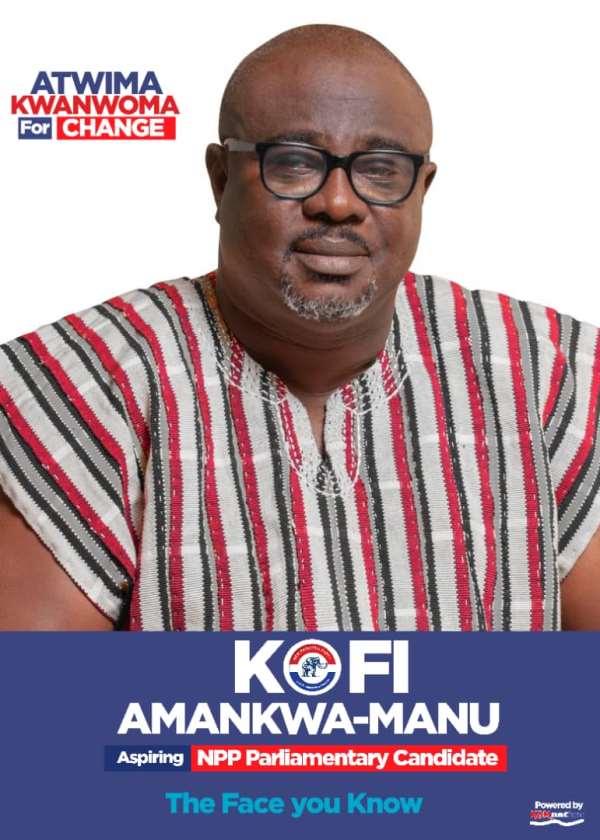 Mr. Kofi Amankwaa Manu, a Presidential Staffer who is aspiring for the NPP’s Atwima Kwanwoma Constituency Parliamentary seat has stated that he represents the new face of hope and aspiration for the people in the constituency, and has therefore called for support for his bid to be the candidate of the party for the 2020 election.

According to him, in pursuit of his vision, he would be propelled by the fundamental elements of hard work, honesty, and humility, competence, character, and care which were basic ingredients required for quality leadership for the party to win more votes for the party.

Mr. Kofi Amankwaa Manu made the disclosure on Friday, March 27, 2020, on OTECFM’S political show dubbed ‘DWABEREM’, hosted by Dr. Cash where he firmly established his contribution to the party and the constituents.

The former Youth Wing President of the NPP at the Kwame Nkrumah University of Science and Technology maintained that it was practically impossible for him let his people down if he is given the nod looking at his vast experience in politics and affiliations amongst the party leadership and the business fraternity.

The Presidential Staffer who is making a third time attempt in annexing the seat disclosed he has already served the constituency through the provision of social interventions to the needy youths and assisted in the construction of some dilapidated school buildings in the constituency.

According to the former Atwima Kwanwoma Constituency NPP's first Vice-Chairman he has resourced some schools in the area with no computer labs, provided scholarships to university students including those financed abroad adding that those in the informal sector were also not left out.

He pleaded during the interview,” I want to appeal to the people in the constituency to vote for me to accomplish this novelty of a vision. Atwima Kwanwoma deserves the best because we have everything to succeed as a community.”

On the Coronavirus and its accompanied calls for a possible lockdown in the country, Mr. Kofi Amankwaa Manu posited that there was the need for Ghanaians to support whatever decision the President, Nana Addo Dankwa Akuffo Addo would come up with. He maintained that though Ghana was not in normal times, we ought to be law-abiding in order not to cause the total widespread of the COVID-19.