COVID-19 Figures, The Need To Remain Calm And Steadfast 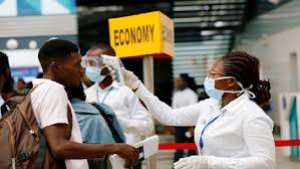 Ghana today recorded 132 confirmed cases of Covid-19 in the country. This has sparked a lot of fear and anxiety due to the increasing number of cases.

The country on the 12 of March recorded its first 2 cases and ever since the numbers keep increasing more cases are expected to be confirmed in the coming days.

Judging from the numbers and percentage of increase in cases, I won’t be wrong exhibiting fear or call for a lockdown since the last count was 68 cases.

Well, there is an interesting twist to these figures. The President last Saturday shut the borders in an address to the nation and also declared a mandatory quarantine for all those that would be coming in through the airport on the Saturday night and Sunday. 1030 have been reported to be on mandatory quarantined.

78 out of 1030 under mandatory quarantined have tested positive to the Covid-19 as at now. The numbers are expected to go up as results of tests taken keep trooping in.

54 of the cases left are from the population. Almost all the 54 cases have travel histories with the exception of the Lebanese who lost his life in Kumasi, the Wife of a military man who passed away at 37 Military Hospital, the husband who is responding to treatment at the same facility, 4 among the 1000s of contacts traced.

Out of the 8 who have no travel history but have been exposed to carriers of the virus are the only local transmission cases on record.

The remaining 46 cases all contracted the virus outside the country and brought it here. This is cases referred to as “Vertical cases or transmissions.

As I was putting together my evidence to write this piece, I heard Dr. Oko Boye making a reasonable argument. What caught my attention was the claim he made that most of the cases confirmed in the population were not people who had a high percentage of the virus within them to easily transmit to people.

Well, the few that have shown symptoms might not have adhered to the protocols, measures or precautions needed to undertake.

Should we still be scared? I would boldly say no. Because is obvious measures undertaken by the Committee in charge have so far been positive and yielded the needed results.

As it stands now, the epicentre can be said to be the in the mandatory quarantined.

I have also heard some experts calling for mass testing making reference with China, South Korea and others. We might not be embarking on a mass testing, but vigorous check-ups and monitoring which is yielding the needed results.

The Committee we are told has been in contact with all those who have been in the country since the beginning of this month to ensure those that might have slipped in before the mandatory quarantined are monitored and picked up. Most of them if not all will be tested and ensured they are free of the virus.

So from this background and information, I believe the call for lockdown is misplaced and a knee jerk reaction to those who have lost control.

If the monitoring continues with the vigorous contact tracing, Education for citizens to adhere to the measures and all other protocols observed, we will overcome this the COVID-19 though the numbers will rise in the coming days.

THIS WRITEUP IS MY PERSONAL OPINION
AUTHOR:
JAMALUDEEN A. ABDULLAH

Bagbin’s new look is cool if only he won’t get carried away ...
16 minutes ago