By Sarah Morris in Madrid - RFI 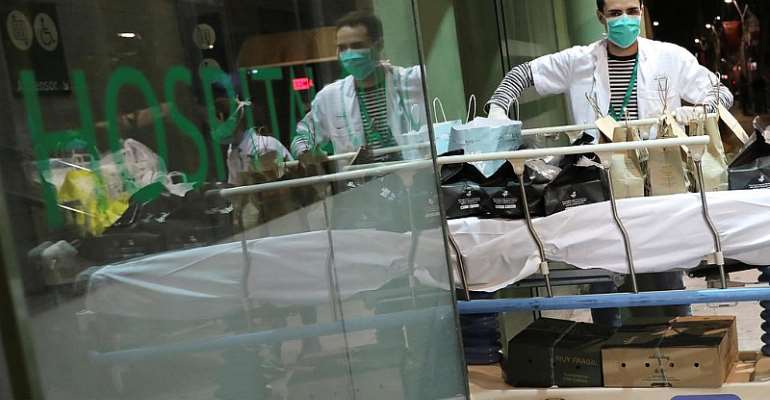 Spain's Prime Minister Pedro Sanchez says the lockdown in place to battle the spread of the coronavirus is one of the strictest in Europe – and many Spaniards agree.

Under the rules, unlike in France and the UK, Spaniards aren't allowed out of confinement for a walk or a jog. They're only allowed out if their work can't be done from home, if they need to buy basic necessities like food or medicine or for an urgent reason like helping a vulnerable relative.

That's particularly tough on people cooped up in small flats, living alone or with children. No wonder the regional government in Aragon is asking the government to allow families to take their children out for a walk.

Almost two weeks into Spain's lockdown, morale is low. The latest figures show a record number of deaths from Covid-19 in a single day. On Friday evening, the death toll for past 24 hours was at 569. But the previous 24-hour period was up to 769 deaths, beating the previous record of 738.

With the lives lost to the virus at 4,934 as of Friday, the second highest in the world, it's difficult for Spaniards to feel the battle is being won.

The nation is proud of its national health service, evidenced by the way the Spaniards started the trend, copied in France and the UK, of clapping their doctors and nurses from their balconies and windows during the lockdown at 8pm every evening.

But they're wondering if their hospitals are up to this challenge and if the regional governments running them are up to the job. Online videos show overcrowded intensive care units, patients sleeping in corridors on plastic chairs and doctors and nurses wearing makeshift protective suits and masks made from plastic bags.

The health ministry normally has a limited role in running day-to-day health services since Spain devolved powers to regional governments. But under the state of emergency enacted during the crisis it has a special brief to lead the battle against Covid-19 and to meet the calls to buy more protective equipment and ventilators.

Faulty test kits put health workers at risk
So, it was particularly embarrassing that the government had to admit to having bought a bad batch of 50,000 Covid-19 tests, which were supposed to be crucial in determining within 15 minutes whether health workers with symptoms had the virus or could keep going on with their jobs. Health Minister Salvador Illa said the tests would be replaced, that they were bought from a Spanish company using a Chinese supplier and that they were EU-certified.

That's cold comfort for the health workers risking their lives to save others'. Some 15 percent are among the 64,000 confirmed cases of the virus, a higher rate than neighbouring Italy. One described the situation like dealing with the 2004 Madrid bomb attacks but with no end in sight.

The pain of social distancing, even in death

As Spaniards enter their third weekend of lockdown, the police and army continue out in force, checking people aren't out making unnecessary journeys. Those who have lost relatives to Covid-19 have usually not been able to hold their hand at the end of their days or to receive their family and friends at the funeral parlour, as is the usual Spanish custom, to see them off.

In Madrid, the worst hit region, an ice-rink is being used as a morgue to take pressure off the funeral parlours. Patients from crowded hospitals are being ferried to a giant field hospital set up at the IFEMA conference centre where soldiers, firefighters and volunteer plumbers have rigged up 15 kilometres of oxygen tubes.

Crucial days lie ahead, say the health authorities, forecasting the number of those needing to be hospitalised and in intensive care due to the virus could peak in the next week. The number of those recovering from the virus and being released from hospital rose to almost 9,400 patients by Friday, compared to 7,000 the day before.

The government says it's asking for one last effort from a population it knows is making sacrifices. And a frustrated population is waiting for a little light at the end of the tunnel.