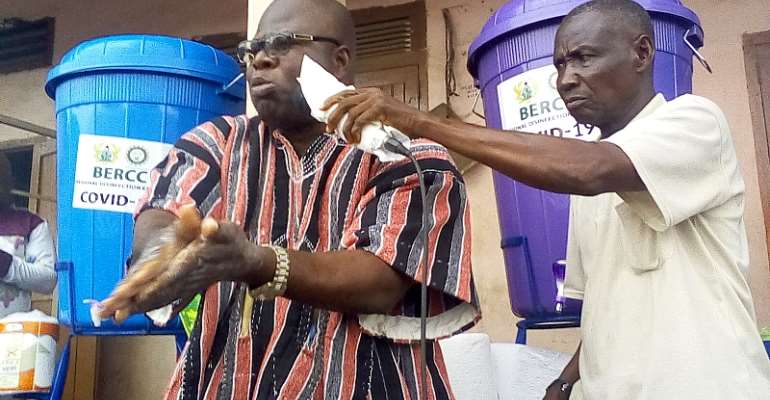 The Atebubu-Amantin Municipal Assembly is putting in place measures to combat any potential outbreak of the COVID-19 pandemic in the municipality.

As a first step the assembly has donated two veronica buckets with ancillary facilities each to the Atebubu market association and the two transport unions in Atebubu.

He said the municipality is expecting a number of veronica buckets from the ministry of Local Government and Rural Development while the assembly will procure about 40 of them from its own resources to ensure that these facilities are available at vantage points throughout the municipality.

Hon. Edward Owusu urged individuals and organizations to complement the efforts of the government and the assembly by providing these facilities for the benefit of the public.

The MCE and his team later toured a number of institutions in Atebubu to ascertain for themselves measures put in place to safeguard the public as well as employees from contracting the disease. These included financial institutions, hotels, filling stations and players in the telecommunications industry.

It came out that while some have put in place adequate measures like the provision of handwashing facilities and sanitizers to prevent any potential contamination and spread of the disease, others had half-baked or no measures at all in place.

The MCE directed defaulting institutions to take immediate steps to rectify the situation failing which his outfit will move in to enforce compliance.

The assembly through various stakeholders is using radio to educate the populace on the disease while the Information Services Department has been put on a field campaign in a bid to create awareness of the pandemic.