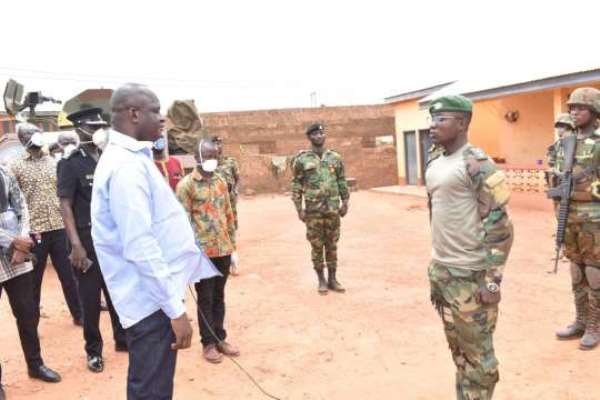 Dr Hafiz Bin Salih, the Upper West Regional Minister, has appealed to security personnel at the country's borders to strive harder and implement the President's directive to the letter to ensure that the spread of the Coronavirus is curtailed.

He said the entire global community was overwhelmed by the infection rate and spread of the disease and that the surest way for Ghana to win the fight against the spread was for all to join hands and fight with genuine commitment.

Dr Salih made the appeal when he visited security personnel at the border posts at Hamile in the Lambusie District of the Upper West Region to interact and see how prepared and committed the personnel were in terms of preventing people from neighbouring Burkina Faso entering the country.

The Minister who led a team of the Upper West Regional Security Council (REGSEC) visited and interacted with the military personnel, the health officials, Immigration and the Customs division of the Ghana Revenue Authority (GRA), where he assured them of government's preparedness to support them carry out their duties diligently.

He said REGSEC was satisfied with the mechanisms put in place by the security personnel and the health officials at the border post and advised them not to relent or relax in their duties, by ensuring that the Region did not record any case of the virus.

He said it was important for the security personnel not to allow any incident that they might encountered demoralize them to relax in their duties saying, “Government on its part is doing all it can to ensure your safety and welfare in this trying time”.

Dr Salih said government would make sure that the efforts of all in the coronavirus fight including the security personnel were recognized and appealed for total commitment in fighting the virus.

The Minister also commiserated with an immigration officer who was allegedly shot at one of the unapproved routes in Hamile during patrols and assured that government would offer the appropriate compensation to personnel who suffered such casualties during the line of duty.

He appealed to the personnel to take advantage of the patrols to educate and sensitize the public on the dangers and preventive measures of the pandemic.

Heads of the units the Minister visited gave the assurance that they would work diligently to implement the President's directive to the letter and expressed gratitude to government for attending to their needs.