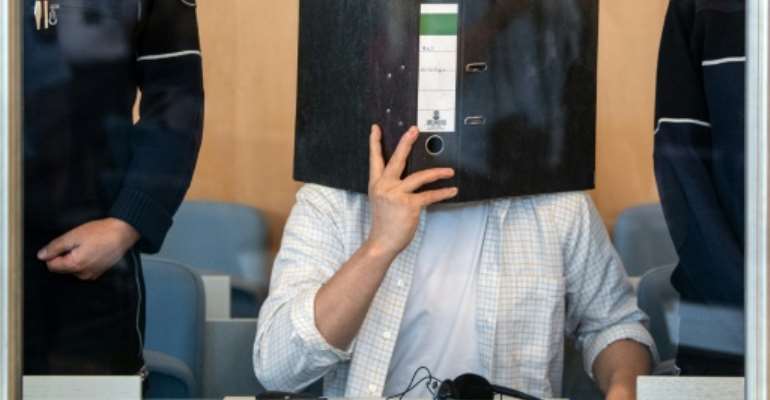 Defendant Sief Allah H. holds a folder in front of his face at the start of his trial on June 7, 2019 at a court in Duesseldorf, western Germany. By Federico Gambarini (dpa/AFP/File)

A German court sentenced a 31-year-old Tunisian to ten years in prison Thursday for planning a foiled biological bomb attack with the deadly poison ricin.

His German wife Yasmin, 43, stands accused of helping him build the bomb, but is now being tried separately after the court accused her defence lawyers of attempting to protract the case with a 140-page statement on Thursday.

The couple "wanted to create a climate of fear and uncertainty among the German population," judge Jan van Lessen was quoted by DPA as saying on Thursday.

He added that they had procured enough ricin to potentially kill up to 13,500 people.

The couple have been on trial since June last year, following their arrest in 2018 by an anti-terrorist squad that found 84 milligrammes of the toxin in their Cologne apartment.

The arrests likely prevented what would have been Germany's first biological attack, said Holger Muench, head of the BKA Federal Criminal Police Office, at the time.

Federal prosecutors said the couple had "for a long time identified with the aims and values of the foreign terrorist organisation Islamic State".

They decided in 2017 to detonate an explosive in a large crowd, "to kill and wound the largest possible number of people," said prosecutors ahead of the trial in Duesseldorf.

Produced by processing castor beans, ricin is lethal in minute doses if swallowed, inhaled or injected and 6,000 times more potent than cyanide, with no known antidote.

The pair had allegedly researched various forms of explosives before deciding on the deadly poison.

They ordered 3,300 castor beans over the internet and successfully made a small amount of ricin.

They also bought a hamster to test the potency of the poison.

The couple were caught after a tip-off from the US Central Intelligence Agency, which had noticed the large online purchase of castor seeds, according to German media reports.

Sief Allah H. admitted to building the bomb, but denied that he had planned an attack on German soil.

His defence lawyers had asked for a sentence of eight years.

"He is certainly guilty, we do not deny that," they reportedly said.