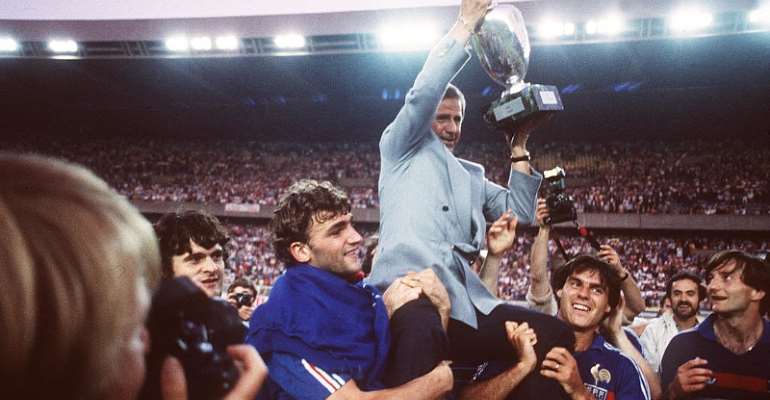 Michel Hidalgo, the architect behind one of world football's most thrilling midfield constructions and France's first international trophy, died on Thursday at his home in Marseille. He was 87.

"I will treasure the memory of a gentle man, great teacher and a wonderful human being," said Michel Platini who captained Hidalgo's formations.

"He protected me and allowed me to express myself on the field and he was one of those who helped me to become the player that I became," Platini added.

Born in Leffrinckoucke in northern France in 1933, Hidalgo played in the midfield of the Reims side that won the 1955 Ligue 1 title. He scored a goal in the 1956 European Cup final defeat to Real Madrid.

After moving into management with Menton and the Monaco reserve team, he was handed the job in 1976 as coach of France.

Within six years, they were one of the world's most dazzling teams. Hidalgo placed Platini's insouciant genius at the tip of a formation dubbed “le carré magique” – the magic square. It ran rings round countless befuddled opponents.

Chance
Their enthralling angles and patterns helped France surge to the semi-final of the 1982 World Cup in Spain where they led Germany 3-1.

But rather than nailing down the victory, they opted for flair. It was their undoing. The Germans ground their way back to 3-3 after the introduction of Karl-Heinz Rummenigge and the incompetence of referee Charles Corver.

The Dutchman failed to dismiss the Germany goalkeeper Harald Schumacher for a foul on Patrick Battiston which left the Frenchman with two missing teeth, damaged ribs and requiring emergency oxygen on the pitch.

The French lost the match on penalties.
However two years later, Hidalgo's outfit claimed the 1984 European championships with a 2-0 victory over Spain. It was France's first major international trophy.

"Michel, as coach, carried the France team to the top by insisting on a style that enabled all of us to show our individual qualities," added Platini.

"Michel Hidalgo leaves a formidable legacy. He reconfigured French football to become an international force. His vision and his work still resounds today in the DNA of our teams.”