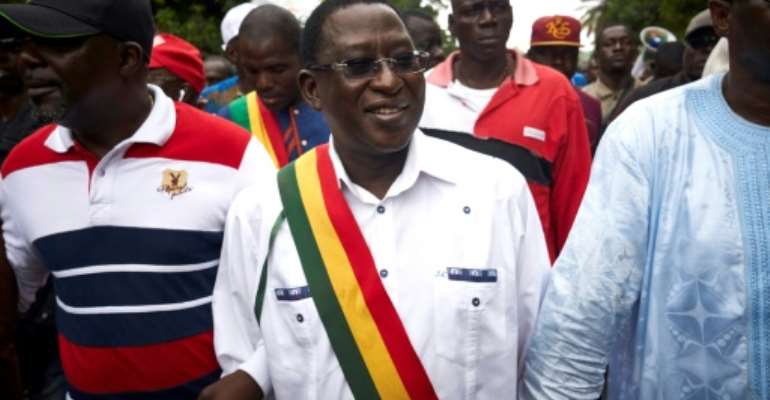 Cisse is a former finance minister and ran for the presidency three times. By Michele CATTANI (AFP/File)

In an unprecedented first for a Malian politician of his rank, unidentified gunmen kidnapped Cisse and his team on Wednesday afternoon, his party said.

The Union for the Republic and Democracy (URD) party sounded the alarm later on Wednesday after Cisse failed to turn up to an appointment and was no longer answering his phone.

Cisse is a former finance minister and has run for the presidency three times.

The circumstances of his disappearance remain unclear, but the government and URD members have said it was a kidnapping.

On Thursday morning, URD spokesman Demba Traore told reporters that Cisse was travelling with a group of 12 people on two jeeps when unidentified gunmen took them.

Five people were freed on Thursday morning, he said, adding that two from the freed group were wounded. One later died.

"During the kidnap, there was shooting," he said, explaining that Cisse's bodyguard had been hit.

"Unfortunately, he couldn't survive his injuries and passed away," Traore said.

Mali has been struggling to contain an Islamist insurgency that erupted in the north in 2012, and which has claimed thousands of military and civilian lives.

Despite the presence of thousands of French and UN troops, the conflict in Mali has engulfed the centre of the country and spread to neighbouring Burkina Faso and Niger.

Al-Qaeda-affiliated jihadists are active in the area where Cisse and his team disappeared.

"All the arrangements are being made to find the missing people and return them to their families," Mali's government said in a statement on Thursday, referring to the disappearance as a kidnapping.

Olivier Salgado, the spokesman for the UN peacekeeping mission in Mali, said the United Nations had deployed a helicopter to search for the missing politician and his associates.

The European Union's ambassador to Mali, Bart Ouvry, also said on Twitter on Thursday that Cisse's disappearance was worrying.

Cisse disappeared while campaigning for a long-awaited parliamentary poll which is scheduled to take place in Mali on Sunday, and which has been delayed several times due to insecurity in the country.

The vote on Sunday is viewed by many as a first step towards ending the spiral of violence in Mali.

After being postponed several times, holding a parliamentary election was a key recommendation from crisis talks in December, which aimed at exploring non-military solutions to the country's crisis.

The current crop of MPs in the country was elected in 2013, in a ballot won by President Ibrahim Boubacar Keita's Rally for Mali party.

Another parliamentary vote was meant to take place in late 2018, following Keita's re-election.

But it never did, and the poll was postponed several times for reasons such as a strike by judges and spiralling insecurity in Mali.

Keita announced on Wednesday that a first round of voting would go ahead on Sunday, despite rumours of a possible postponement due to coronavirus.

Mali has recorded two coronavirus cases to date, in two nationals who had recently arrived from France.

Keita said that the vote would take place in "scrupulous respect" of health measures, however.

Mali has stopped flights to and from virus-stricken countries. On Wednesday, Keita also announced a nationwide night-time curfew in order to curb its spread.

We’ll Resist Attempts To Use BOG’s Funds To Finance NPP’s El...
18 minutes ago

Obinim To Pay GHS1.6m Tax Liability; Court Throws Out His Ap...
57 minutes ago