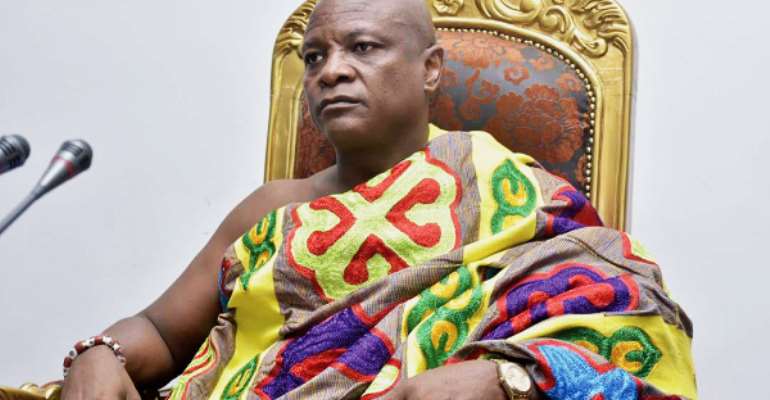 When almost a quarter of the world’s population is in lockdown due to the coronavirus pandemic, readers may wonder is it the time for Appiah to write this rejoinder? For those readers who may have misgivings about the timing of this rejoinder do accept my sincere apologies. I have been out of action for some time and missed the 17/11/2019, article written by Kwame Okoampa Ahofe Jnr accusing Togbe Afede X1V as a “serial loser”.

I sincerely apologise on behalf of my ailing mother whom I am currently caring for on full time basis in UK, and all those suffering from the corona virus for my write-up. Sorry, it had to be done to clear the air and set the records straight.

I believe at this critical time the voices of traditional authority would and should be crucial in stemming the spread of the virus. It is therefore important that all of us respect the elected President of the National House of Chiefs and traditional authority, as they seek to work with central government to enlighten us on the effect/impact of coronavirus.

With this in mind, it is my contention that the President of the National House of Chiefs (NHoC)has an important role to play. Moreover, the role of the NHoC is enshrined in the 1992 Constitution.

Brief role of the National House of Chiefs

As Otumfuo Osei Tutu 11 clearly espoused “Chiefs must be giving a central role in the administration of Local Government” before NPP/NDC/CPP/NDP there were chiefs. It goes without saying that all our institutions at all times must be respected, strengthened, supported and valued.

All of us, have a life span but our children, grand, great grandchildren can only inherit and build on solid institutional foundations if we lay the bricks right and prove that we are worthy to keep the fort for the next generation.

Do Not Let Us Undermine our Institutions

I have no beef with Kwame Okoampa -Ahofe, Jnr. I do not know him, and have no intention of cultivating his acquaintance. But to call the duly elected President of the National House of Chiefs a “serial loser” is not just offensive but very demeaning of the Chieftaincy institution which by the way his Royal Highness Osagyefuo Amoatia Ofori Panin is a fully paid up member. Indeed, the Okyenhene contested the Presidency of the NHoC with His Majesty Togbe Afede X1V.

Most well brought up Ghanaians (from good homes/background) would never dream of calling any elder a “serial loser” never mind the President of the NHoC.

For the benefit of readers, the derogatory definition of a” loser is someone who doesn’t know what they have and always make bad choices” Is the current President of the NHoC a serial loser? It is not up to me to decide.

I pray that readers of this rejoinder would be the judge and jury after clawing through the evidence.

Let us examine some of the achievements of the “serial loser”. Maybe someone in Kwame Okoampa -Ahofe, Jnr family, clan or tribe can surpass the success of this “serial loser”.

Readers from the above evidence do you see any traits of a serial loser? Someone who has created thousands of full time, well paid jobs for Ghanaians. An individual , whose achievements is celebrated both home and abroad. A traditional ruler who has never taken a penny from stool lands and actually paid for the land that he built his house at Ho. A person who has dedicated his life to service for his country, whose humility and dedication to his people and country is legendary being called a “serial loser”?

The evidence suggests to me that the current President of the NHoC is a successful business mogul, a serial entrepreneur and a philanthropist. (based on the evidence above).

Come of it Kwame Okoampa-Ahofe Jnr you can do better than that.

There is a lovely saying in the Akan language “If you hate the antelope at least admire his running prowess”. Well, as Kwame Okoampa -Ahofe, Jnr does not even recognise that there is a Volta Region, I dare not mention that the “serial loser “happens to be the Agbogbomefia of the Asogli state and the overlord of Ho the capital of Volta Region.

I guess, Kwame Okoampa -Ahofe, Jnr, is from the Royal House of Okyenman. Has he not been reliably informed of the friendly links that exist between the current occupant of the Okyenman Ofori Panin Stool and Togbe Afede X1V.

Togbe Afede X1V is a good and personal friend of the Okyenhene. I have sat in meetings where the 2 prominent Chiefs have deliberated and discussed issues concerning Ghana and how they could contribute their widow’s mite in creating a better future for the next generation.

Moreover, when the current Finance Minister Hon. Ken Ofori Atta arrived back from USA he stayed at the same flat with the “serial loser” ate together, shared ideas together and the two young men created/founded Data Bank.

By the way Ken’s mother (the sister of His excellency Nana Addo Dankwah Akuffo Addo) was providing his “two young men” Ken and the then James” foodstuffs planted on the farms of Kibi on weekly basis. It was an excellent friendship recognised by both set of family members.

Regional Re-Organisation
I do not intend to get into any infantile discussions and debate with Kwame Okoampa -Ahofe, Jnr on the pros and cons of the regional reorganisation. That is history and future generations would be the better judge of his so called “Afede frigate” of fierce protest.

Elections of MMDCE’s
With regards to the elections of the MMDCE’s by popular franchise, Kwame Okoampa -Ahofe, Jnr accuses Togbe Afede X1V as a “corrupt traditional ruler intent on criminally regressing the civilized political development of the country by signing a press release which was not approved by the National House of Chiefs.

Kwame Okoampa -Ahofe, Jnr goes on further to state that Nana Ogyeahoho Yaw Gyebi, President of the Western Region House of Chiefs, former Chairman of the Governance Committee, NHoC had released a press release claiming that the democratic decision of the collective NHoC was a two-man decision and it had no bite.

Celebrate Success
Most American democrats did not vote for Michael Bloomberg during the primaries but none of them would fault him for his business acumen and philanthropic works. Failure to recognise success and achievements of others creates an impression of envyness, jealousy and simple hatred.

There is also a saying in Akan which states “If I was a member of your family you will value me”.

I would like to ask Kwame Okoampa Ahofe Jnr a simple question, knowing what he knows now, if Togbe Afede X1V was his brother or uncle would he call him a serial loser? I wish him good luck.

The fact that Ghana has an open, transparent and inquisitorial form of government does not mean one can print blatant falsehood materials and spew garbage about decent folks. The fact that our matured democracy and open governance systems have generated a lot of sensible debates does not give the licence for individuals to malign and insult our elders.

Conclusion
In concluding, I want to make one thing clear- as a people we must celebrate success. We may have our own personal idiosyncrancies, hatred, bigoted, and tribalistic views of certain individuals but at least let us respect and celebrate their achievements.

Most of the time the word “serial losers” is used by many idiots to make them feel better about themselves when indeed they are shit holes. It is also a fact that individuals with narcissistic views tend to be least appreciative of other people success leading to a tunnel vision analysis of real issues.

For your information Kwame, Togbe Afede X1V will continue to ask questions of our leaders, hold them accountable and help to build institutions that serve the people”.

BY Appiah- Danquah Kufuor (No Degree)

JHS graduate appeals for $45,000 to undergo kidney surgery
20 minutes ago