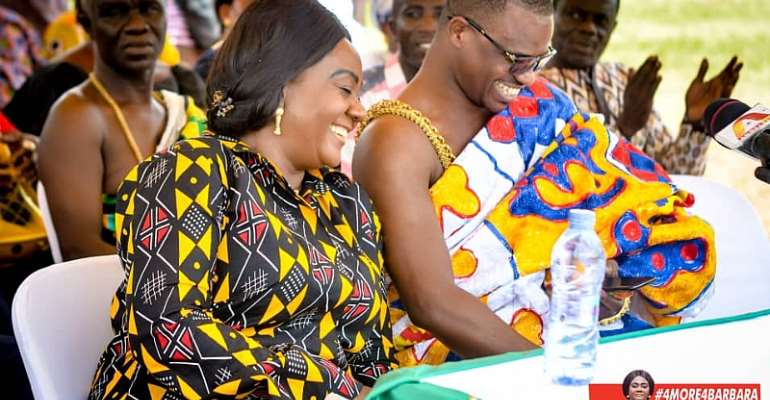 The Divisional Chief for Prestea-Heman Traditional Area in the Prestea-Huni Municipality in the Western Region, Nana Nteboa Pra IV has commended the Member of Parliament (MP) for Prestea-Huni Valley Constituency, Hon. Lawyer Barbara Oteng-Gyasi (Mrs.) for her inspirational role of pushing several social and infrastructural development, particularly fixing road network in the area.

According to the Chief, the MP has played a Yeoman's role in the construction of the ongoing Prestea-Himan Urban roads project.

This is an attestation to the fact that , the female legislator is working hard for the interest of the good people in the community and therefore she needs to be commended.

'Our MP, Hon. Mrs Barbara Oteng-Gyasi needs to be praised because she has played a dynamic role of ensuring that the Prestea-Heman inner roads project, which is an agreement under the Government of Ghana and Sinohydro of China, (2017) has come to light,” Nana Nteboa Pra IV made this commendation in an exclusive interview with, Today newspaper when its reporter on a fact-finding mission on the roads with the Prestea-Himan traditional area called on him.

The Chief on behalf of the residents of the area expressed gratitude to the government of Ghana for fulfilling its promise made to the area.

According to him, in 2014 under the government of the former President,John Dramani Mahama, he together with his elders had raised concerns about the deplorable state of the roads.

He explained that in 2017, Vice President Dr Alhaji Mahamadu Bawumia came to Prestea-Heman on a salah tour and told him the government was aware about the bad state of the road in the area.

He asserted that “God being so good,” the construction of the Prestea-Heman inner city roads project was captured in the 2018 budget which was read in the House of Parliament.

He noted that they are happy for the commencement of the project .

Nana Nteboa Pra IV stated that he would ensure that the people in the community would offer the necessary assistance to the contractor of the of project Power Construction Corporation of China Limited. (POWERCHINA).

The chief indicated that Hon. Lawyer Barbara Oteng-Gyasi (Mrs.) therefore, urged the residents to be patience with her and the government of President Nana Addo Dankwa Akufo-Addo.

According to him, the MP asked the people in the community to rally behind them as they work to deliver on their promises, adding that every community in the constituency would get its fair share of the national cake.