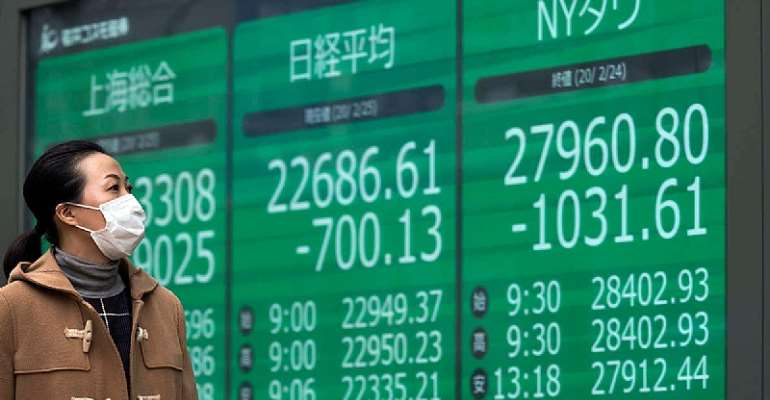 We failed to shut you down as a country when we could. In fact, we were ill-prepared and you took us by surprise. You were underestimated, and others were forming jargon with your name.

You were declared as pandemic disease, with other titles which sounds very sad. Some were calling you Terminator one(1) and others was highly interested in labeling you as "Killer Nkuto".

For Ghana, it even became a challenge, called, "The Corona Challenge" We were not bothered by your local and international implications. In fact, you took us by surprise.

You were imported through our borders. Pragmatic measures were not taken, but all things being equal, you are now with us.

Your works are too scary, and we are finding it difficult to dry you up. Looking at your morphology, we can not dry you up by using a spoon to fetch you out, neither a pail.

It is getting harder and harder to close your tap across the globe. The global curve is no more romantic....and does not inspire hope.

We are ready to place focus on your curve. What to do, how to do it and the possible outcome.

THE NEED TO FLATTEN THE COVID-19 INFECTION CURVE

Efforts to completely contain the new coronavirus — the pandemic responsible for infecting hundreds of thousands of people globally with the disease, called COVID-19

In epidemiology, the idea of slowing a virus' spread so that fewer people need to seek treatment at any given time is known as "flattening the curve." It explains why so many countries are implementing "social distancing"

Here's what you need to know about the curve, and why we want to flatten it.

What is the curve?

The "curve" refers to the projected number of people who will contract COVID-19 over a period of time.

The curve takes on different shapes, depending on the virus's infection rate. It could be a steep curve, in which the virus spreads exponentially (that is, case counts keep doubling at a consistent rate), and the total number of cases gets to its peak within a few weeks. Infection curves with a steep rise also have a steep fall; after the virus infects pretty much everyone who can be infected, case numbers begin to drop exponentially too.

The faster the infection curve rises, the quicker the local health care system gets overloaded beyond its capacity to treat people. As we're seeing in Italy, more and more new patients may be forced to go without ICU beds, and more and more hospitals may run out of the basic supplies needed to respond to the outbreak.

A flatter curve, on the other hand, assumes the same number of people ultimately get infected, but over a longer period of time. A slower infection rate means a less stressed health care system, fewer hospital visits.

How do we flatten the curve?

As there is currently no vaccine to prevent COVID-19, and because testing is so limited in Ghana to only two centres, the only way to flatten the curve is through collective action. The Ghana Health Service with the Ministry of Health has recommended that all Ghanaians wash their hands frequently, self-isolate when they're sick or suspect they might be, and start "social distancing" (essentially, avoiding other people whenever possible) right away and the use of a mask for front health liners.

To comply, The Government of Ghana has temporarily closed all schools in the country and has advised suspension of social gatherings, some businesses have halted activities all in compliance to control this menace.

So, does flattening the curve work?

It did in 1918 when a strain of influenza known as the Spanish flu caused a global pandemic. To see how it played out, we can look at two U.S. cities — Philadelphia and St. Louis — Drew Harris, a population health researcher at Thomas Jefferson University in Philadelphia, told NPR.org.

In Philadelphia, city officials ignored warnings from infectious disease experts that the flu was already spreading in the community. The city instead moved forward with a massive parade that gathered hundreds of thousands of people together, Harris said.

"Within 48, 072 hours, thousands of people around the Philadelphia region started to die," Harris said. Ultimately, about 16,000 people from the city died in six months.

The city, now known for its towering Gateway Arch, had successfully flattened the curve.

As citizens of Ghana, let's do our maximum best to "flatten" the infection curve of the COVID-19 virus by adhering to all precautionary measures given and also keep on educating others in our local languages.