By Francis Nyamnjoh - The Conversation 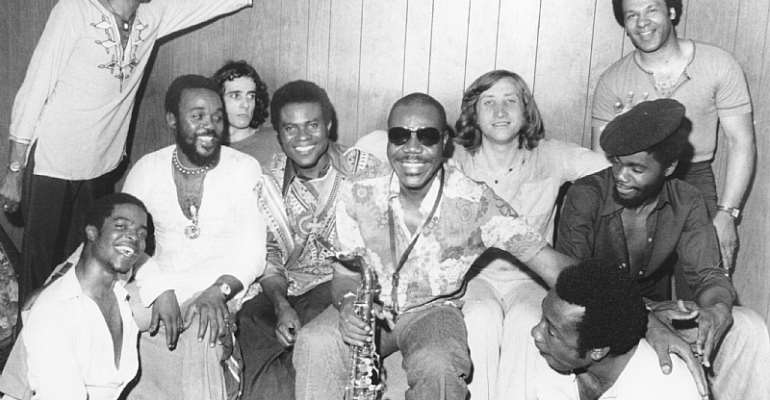 Emmanuel N'Djoké Dibango – Manu Dibango – will live forever thanks to his Afropolitan sounds, and to the fact that many artists in Africa and beyond are deeply indebted to him.

He was a man of legendary generosity of spirit and talent, with an accommodating heart that sought to bridge the local and the global with creativity and innovation in song and music. His album Soul Makossa was of such artistic genius that even a global superstar like Michael Jackson couldn't resist sampling from it to enrich his own album, Thriller .

In his 1994 biography, Dibango describes himself as “Négropolitain”. It's a term that would later be adopted and popularised as “ Afropolitanism ” by others enthralled by his idea of grounded cosmopolitanism. He coined the term to capture his identity as Afro-European or

African and European at one and the same time.

He saw himself – and insisted on being seen – as “a man between two cultures, two environments”. His music could not be confined to either, without losing its complexity and richness. It was the fruit of his diverse influences. His nimble fingers, voice and intellect were averse to any artificial barriers or attempts to contain the flow of the river of musical humanity. Manu Dibango performs on stage at Ronnie Scott's club in 2009 in London. David Redfern/Redferns

Born on December 12 in 1933 in Douala, Cameroon, Dibango was sent by his parents to study in France when he was only 15 years old. He arrived in France bearing a gift of three kilograms of coffee from his parents, for his host.

In France he met Francis Bebey , another musician from his native Douala, with whom he formed a band and began to experiment with different modern instruments, such as the piano and the saxophone. He later relocated to Brussels where he met his wife to be, Marie-Josée (whom he would fondly call Coco). It was also in Brussels that his music career began to blossom through fruitful contacts. Two in particular stand out: Joseph Kabasélé and African Jazz, who introduced him to “the cha-cha and the rumba, the two breasts nourishing Zairean music”, and who, in 1961, also invited him to Zaïre (today's Democratic Republic of Congo). The result was his first record, African Soul, “a mixture of jazz, popular music, and rumba”.

Dibango's life was exemplary in its resilience, combativeness and ingenuity in mobilising his creativity to contain or at least confront political and cultural repression. His music brought him worldwide fame. But he did not feel particularly fulfilled in the land of his birth.

He spent the best part of his life in a determined struggle to win recognition for music as art and musicians as artists in his motherland and elsewhere in Africa. These were contexts of strongman politics, personality cults and repeated frustrations by politicians, sometimes in cassock. Notwithstanding censorship, jealousy, penury, and repeated frustration and disappointment as an artist, Dibango refused to be deterred.

He returned to Cameroon from Zaïre in 1963, issuing the album Nasengina. This was his only piece constructed purely from the indigenous Cameroonian makossa .

Dibango was appreciated by ordinary Cameroonians. But he hated the fact that politicians kept his artistic creativity under close surveillance. He was disenchanted with authorities that did not allow people “to fantasise” and “to dream”, and who forced everyone to talk “in cautious whispers” and to be “wary of everyone else”.

In 1964, disappointed in “this harmful atmosphere”, Dibango closed down his club and abandoned all dreams of opening a musical conservatory or arts institute. He left Cameroon for France after barely 16 months back home.

Still, he could not bring himself to give up on Cameroon entirely. He would pay brief return visits from the early 1980s onwards. His desire “to forge a unified image of Cameroon, representing all the musical currents in the country” received rare facilitation from the Minister of Culture who happened to be his friend, and resulted in a three-record set, Fleurs Musicales du Cameroun .

But his desire to project himself as “this famous Cameroonian musician heard everywhere but in Cameroon” would be met with the same contradictions, making the air “unbreathable” in what he described as his “last African adventure”.

He felt cursed that he “couldn't create something here in Cameroon”. He found it ironic that Côte d'Ivoire, with the blessing of then President Houphouët-Boigny, could entrust him with the task of heading the Orchestre de la Radio-Télévision Ivoirienne, while Cameroon could not even take seriously his expertise as a professional musician of world renown. Dibango in Paris in 2005 before participating in the concert in support of the journalist Florence Aubenas who disappeared in Baghdad. Bertrand Guay/Contributor/Getty

Together with other expatriate African musical talents in France, Dibango released Tam-Tam pour l'Ethiopie , to raise funds for famine-stricken Ethiopia between 1983 and 1985. The initiative served as “proof that Africans too could take concrete action” vis-à-vis their own predicaments. And he personally took the proceeds from the album to refugee camps in Ethiopia to ensure that

'For once, the money wouldn't be misused by the government in power'.

Although the situation has improved significantly since publication of his biography in 1994, Dibango's music is still much more appreciated abroad – as “world music” – than in Cameroon.

Despite the government's attempts to impose creative inertia upon him in the early 1960s, Dibango was given the honour of composing the theme song of the 1972 Africa Cup of Nations football finals hosted by Cameroon. In 1988, he received a decoration as a Knight of Order and of Valour. However, as Dibango observed, “the authorities could decorate me with all the medals they liked” without doing much to stop “the descent into hell” for artistic creativity in a country where it is not uncommon to mobilise the military to raid clubs. Or to impose entertainment taxes with the intention of crippling artists who are perceived to be critical or unpalatable.

Manu Dibango died after contracting COVID-19 at the age of 86 in Paris, where he felt “condemned to be an expatriate”.

Quibble as they may in Cameroon, Dibango leaves behind a towering record of Afropolitan musical genius of truly global magnitude, to feed and inspire many a generation to come. Manu Dibango does not have to be in Cameroon, in Africa or physically in the world to continue to do things of relevance.

Francis Nyamnjoh does not work for, consult, own shares in or receive funding from any company or organization that would benefit from this article, and has disclosed no relevant affiliations beyond their academic appointment.

Hottest Photo Reports
Catch up with all the political quotes from our politicians.
Advertise here
More Article
ModernGhana Links
The Use Of Advertising Appeal In Breast Cancer Awareness Month
﻿#EndSARS: Memorialization or Fanfarization?
Thoughts Of A Nima Boy: Ayisha Abdallah Asks, ‘Ever Held The Hands Of The Sick, The Old, Bedridden Or Dying Person?
Open letter to celebrities: Celebrity lifestyles and mental illness: The case of Funny Face
International Day of the Girl Child: The need to promote the development of the Girl Child
A Critical Perspective Evaluating The Cpp
The Reality Of Party Factions And Power Blocs!
Two-Camels Amess
Government Must Account on the Utilization of the COVID-19 Funds
TOP STORIES