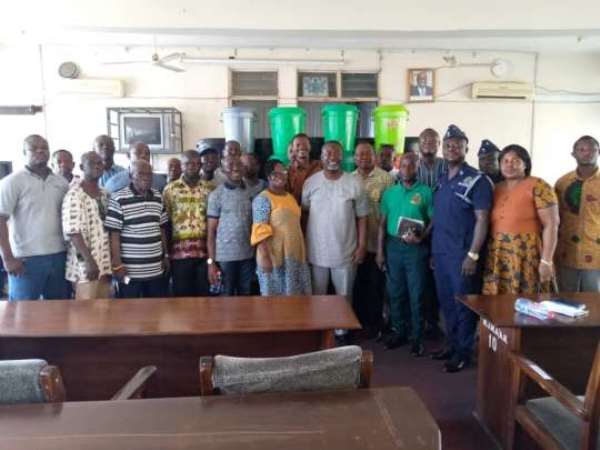 The team was inaugurated to implement President Akufo-Addo's directive on coronavirus preventive measures, carry out public education on precautionary procedures and ensure adequate plans were in place to manage any case in the area.

Mr Isaac Appau-Gyasi, NJSMA Municipal Chief Executive, in a release copied to the Ghana News Agency said the team would be at the fore front of all measures in the Municipality to curtail the spread through effective monitoring to ensure every citizen adhered strictly to the precautionary measures.

According to the statement, the Assembly has suspended all gatherings and programmes entirely and provided handwashing facilities at all vantage points at the Assembly for both staff and visitors.

Again, marriage registration and wedding ceremonies at NJSMA have been limited to couples and witnesses, two from both the bride and the groom sides only.

The measure is to regulate crowd at the Assembly Hall, which may pose threat to workers and the visiting public.

The release also indicated that all public places such as restaurants, drinking spots, and public toilet facilities were instructed to strictly adhere to the directives by providing handwashing facilities and sanitizers as well as observe the social distancing etiquette.

It encouraged citizens to frequently wash their hands with soap under running water for, at least, 20 seconds, and use approved hand sanitizers, as well as cover their noses and mouths when sneezing and coughing to avoid the spread of the disease.

Mr Collins Aikins Akuffo, NJSMA Public Relations Officer in an exclusive interview with GNA, said the Assembly had purchased about 1000 hand sanitizers and 500 Veronica buckets to distribute to its staffs, market women and drivers.

He said the Assembly was doing more radio education to educate the public and tasked Information Centre operators to use their media to keep educating the masses on the disease and its preventive measures.