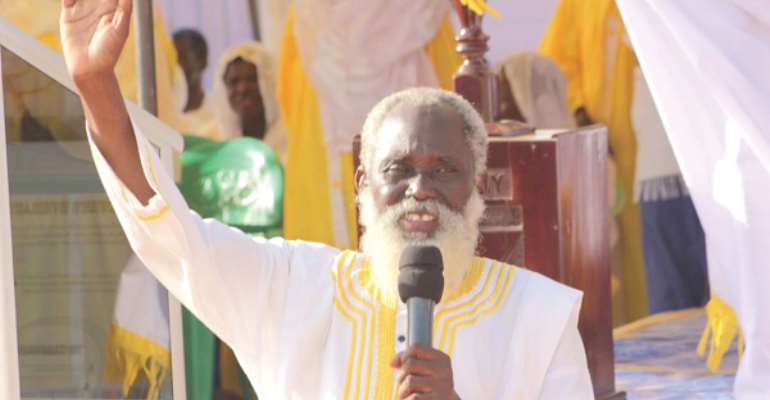 World Leader of the Seventh Day Church of Theocracy, Apostle Kadmiel Emmanuel Howard Agbalenyoh, has said, Ghana fasting and prayer seeking for God's intervention in the fight against coronavirus. must be in the temple.

According to him, the Covid-19 pandemic currently infecting nations is caused by the riot of God as a result of sinful acts of mankind and that the world must seek God's intervention but in the temple.

He said, closing churches in its entirety must be reconsidered.

Speaking in an interview, the Apostle lauded steps taken by the President, H.E Nana Addo Dankwah Akufo Addo to call on some men of God in the country to intercede for the country in the wake of coronavirus, and subsequently declaring a national fasting and prayer session, but however said to be effective, it must be done in the temple of God.

He mentioned, that some lifestyles and human rights after the second world war has led to immoral act across the globe; with fornication, lesbianism and gayism, bestiality among others, and at its peak indicates the COVID-19 is a curse on humanity by God.

"According to scriptures Number 16:43 to 50, when God sent a plaque on Israelites for sinning against him, it was through the Prophet, Aaron and Moses that the plaque was curbed because he directed them to go to the temple and pray. Sameway when 70,000 people were destroyed in Israel when they annoyed God, David erected an alter and offered a sacrifice for God to hear his prayer and stopped the plaque," he stressed.

He continued, "Now, coming to the time of King Solomon where he built the temple of Jerusalem, he prayed and asked God to have mercy on Israel and also accept the tabernacle. So in second Chronicles 7:12 to 14, God came down and told King Solomon I have heard thy pray and have chosen this place to be the alter of sacrifice and whenever I Iock heavens and also send epidemic unto the land when the people will turn from their evil ways, obey his commandment and pray, he will heal them."

"So it is for us to understand that, outside the temple is no spirit of Ghana, because the temple is the footstool of God. The Bible says heaven is the thrown of God, that means where God's name is established, it is there that he has administered his prophets, Apostle and pastors."

Apostle Kadmiel further noted that "Joel 2:15 to 20 speaks to the procedure to seek God's intervention in times of national crises."

"So if the temple today has been closed, it means we have imprisoned the almighty God. How would he accept our intercession and redeem us," he quizzed.

He proposes that the President should reconsider the closure of churches and mosques to allow the clergy to actively be in the churches/temples and pray for God's forgiveness.