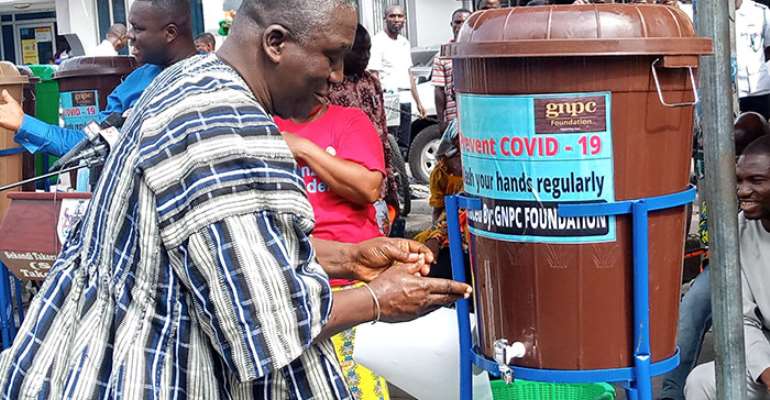 Nana Kobina Nketia washing his hands during the ceremony

The Ghana National Petroleum Corporation (GNPC) Foundation as part of its social mandate to help prevent the spread of the Coronavirus disease has distributed some assorted items to various markets in the region.

The items included veronica buckets, bottles of hand sanitizers, gallons of hand washing soap, tissue papers, dustbins, hand gloves and face masks among others which would be used by the market women as well as customers visiting the markets.

Among the beneficiary markets were major markets in Takoradi, Agona Nkwanta, Anyinase, Tarkwa, Bogoso, Sekondi, Wassa Akropong, Assakae, Kojokrom and Asankragwaa as well as the offices of the Western Regional House of Chiefs

Speaking on the objectives of the donation, Dr Dominic Eduah, Executive Director of GNPC Foundation, said the donation formed part of the foundation's core mandates to promote health and safety through health campaigns and interventions.

He said the vision of the foundation was to impact 10 million lives in the next five years after a holistic impact assessment as far as the foundation's achievements were concerned.

“We kept asking ourselves how we could get the 10 million lives to impact if this pandemic was not stopped. So we decided to support the fight against the spread of the disease by the distribution of these items,” he said.

He indicated that the GNPC Foundation would follow it up with more donations to major markets in other parts of the country.

The Minister of Tourism, Arts and Culture, Babara Oteng Gyasi, who was present during the presentation, stressed the need for traders in various market centres to practice good hygiene and social distancing so as to limit the spread of the new Coronavirus disease.

The Sekondi-Takoradi Metropolitan Chief Executive, K.K Sam, told the market women that very soon the Takoradi market would be shut to allow for disinfection and fumigation exercise as part of efforts to prevent the spread of COVID-19.

He appealed to the traders not to allow their children, who were currently at home, to follow them to market centres but ensure that they stayed at home to read their books.