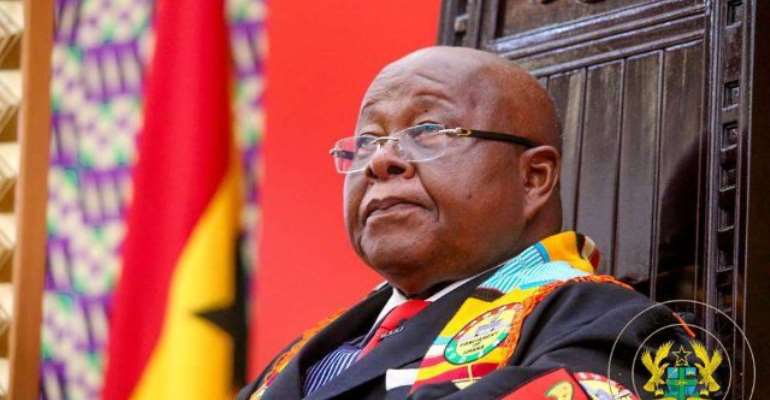 Speaker of Parliament, Prof. Aaron Mike Oquaye has rebuked the Minority over its handling of a memo recommending to Parliament the adoption of a bipartisan national response plan to help combat the Coronavirus pandemic.

Although the memo was addressed to the Speaker, Oquaye insisted that, at the time the document was circulating on social media, his office had not been served.

Minority Leader, Haruna Iddrisu who signed the said memorandum had recommended among other things a joint national effort.

“For Parliament to move forward on a bipartisan basis it will be necessary to debate a comprehensive, multi-sectoral, national response plan. The moment in which Ghana finds itself calls for a proactive plan that goes beyond occasional lists of reactionary measures. We will need to review the underlying epidemiological and statistical analyses that inform the proposed interventions, and the same applies to the strategic plan for executing those interventions.”

“The national plan must prioritize and cost responses over a realistic analytical horizon that reflects the epidemiology of the disease and the projected therapeutic timelines. The best available information suggests that this pandemic will only truly end with the discovery of a vaccine or a cure, and the present estimates of either product range from 12 to 18 months. The underlying strategy must be costed with this timeframe in mind and must be accompanied by a detailed rationale for the specific appropriations. It must also be clear on any and all additional powers that Government may need that are not enshrined in Act 851. Our caucus is committed to approving the justified legislation, borrowing and spending within that temporal and constitutional framework,” the memo added.

The Minority also suggested that the national plan must address the requisite behavioural and medical interventions needed to contain the spread of the virus and to mitigate its consequences for affected persons. Speaker’s concerns

In response, Oquaye in a statement through the Parliamentary Service reiterated that although the said memo was reportedly sent last Friday, March 20, 2020, his office received it “at 12.40 pm” on Tuesday afternoon.

The Speaker argued that the Minority Leader knows the appropriate procedures for handling all matters in Parliament and it would have been most appropriate if these in-house channels had been explored rather than circulating the information in the media, especially since it is an internal memo.

“Given the seriousness of the matter, the Speaker expected an expeditious action where the Minority Leader would have approached and conferred with the Speaker for necessary action,” the statement added.

According to the Speaker, he had not seen the Minority Leader because he [Minority Leader], has been absent from the leaders meeting and chamber on Saturday and Monday.

The statement concluded by saying that: “the issues contained in the said memo are issues that have to be dealt with using due process. The interest of the citizens and the nation should remain paramount”.

Meanwhile, the Member of Parliament for Ningo-Prampram, Samuel Nartey George has excused himself from sittings in the House over non-COVID-19 deliberations.

In a letter to the Speaker of Parliament, the Ningo-Prampram legislator said he was of the view that the House has failed to live up to expectation in times like this.

“It is my considered belief Rt. Hon Speaker that, the august House of Parliament is failing to exercise its truly intended mandate in crisis times like this. I hold the strongest conviction that we are pandering whilst the flames that may engulf the state are being stoked.”

Sam George also added that for the past two weeks, the House has met to deliberate on the Imposition of Restrictions Bill and the approval of some loans which do not directly deal with the fight against the coronavirus pandemic.