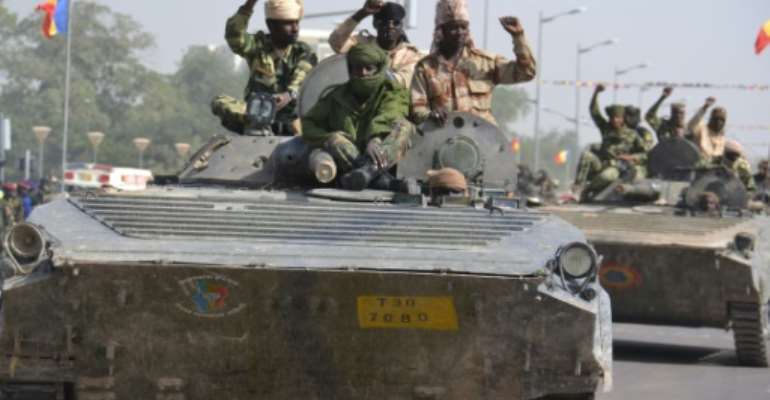 Chadian soldiers have been part of a regional force fighting against Boko Haram. By BRHAIM ADJI (AFP)

Boko Haram jihadists have killed nearly 100 Chadian soldiers in a seven-hour attack on an island army base, in their deadliest assault yet on the country's armed forces.

President Idriss Deby told Chad television he travelled to the scene of the attack on Tuesday to pay tribute to the 92 dead soldiers, saying it was the first time so many troops had been lost.

The attack early Monday morning in Boma, Lac province, is part of an expanding jihadist campaign in the vast, marshy Lake Chad area, where the borders of Cameroon, Chad, Niger and Nigeria converge.

Boko Haram launched an insurgency in Nigeria in 2009 before beginning incursions in its neighbouring countries to the east.

"We lost 92 of our soldiers, non-commissioned officers and officers," in the attack in Boma, the president said.

"It's the first time we have lost so many men," he said.

The attack on soldiers on the Boma peninsula lasted at least seven hours, and reinforcements sent to help became bogged down and were also targeted, several military sources told AFP.

"The camp is on an island where the ways in were controlled by Boko Haram fighters, they were able to leave as they wanted and without being forced out by the army," one security official said.

"The enemy has hit at our defences hard in this zone," the senior officer said.

One military official said army vehicles were destroyed, including armoured vehicles, and captured military arms were carried off in speedboats by Boko Haram.

The base was taken by surprise by the 5:00 am attack, the official said.

Boko Haram has stepped up its attacks in recent months on the islands of the Lake Chad basin where it takes advantage of the vast terrain to launch assaults.

Boko Haram's insurgency has killed 36,000 people and displaced nearly two million in northeastern Nigeria since it began, according to the UN.

Since 2015, countries in the region have cooperated in the Multinational Joint Force, a regional coalition engaged around Lake Chad with the help of local residents formed into vigilante groups.

But the regional militaries are struggling to cope with the jihadist insurgency.

In Cameroon, violence increased in 2019 and early 2020. In Cameroon's Far North, 275 people were killed by jihadist attacks in 2019, most of them civilians, according to a report published by Amnesty International in December.

In Niger, 174 soldiers were killed in three attacks in January and December.