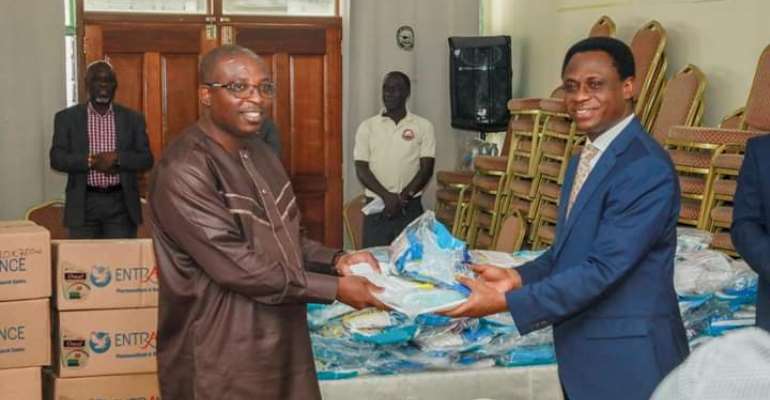 The Church of Pentecost (CoP), in partnership with Tobinco Pharmaceuticals, has donated personal protective logistics worth GHS 45,000.00 to the Ministry of Health (MoH) in support of efforts by the Government in dealing with the COVID-19 pandemic in Ghana.

The items, which included coveralls, nose masks, N95 respirators, face shields, goggles, aprons, examination gloves, heavy-duty gloves, gumboots, and hand sanitizers, among others, were presented to the Deputy Health Minister, Hon. Alexander Kodwo Kom Abban, by the Chairman of the church, Apostle Eric Nyamekye, on Tuesday, March 24, 2020, during a strategic meeting with directors of nursing and midwifery institutions in the country held at the national office of the Nursing and Midwifery Council of Ghana (NM&C) in Accra.

CoP General Secretary, Apostle Alexander Nana Yaw Kumi-Larbi, who spoke at the presentation, indicated that the church has set aside a fund of GHS 100,000.00 to support Government's efforts in fighting the coronavirus pandemic, out of which, the personal protective equipment (PPE) has been procured to support health officials who are front liners in the battle against the deadly virus disease.

He also revealed that the church has released 10 of her cinema vans to the National Commission for Civic Education (NCCE) to be used to undertake public education exercises on the pandemic across the country for the next four weeks. Apostle Kumi-Larbi said, in addition to releasing the vans, the church has offered to foot the bill for car maintenance, fuel, and allowances for the drivers who will be using the cinema vans for the public education exercise during the four-week period.

“The vans have Public Address systems fully fitted in them to serve the purpose of educating the general public about the deadly virus disease as well as the precautionary measures,” he added.

Receiving the items on behalf of the ministry, Hon. Alexander Kodwo Kom Abban expressed gratitude to the church for the thoughtful gesture, saying, “In times like these, we need all to come on board.”

He called on religious groups, particularly churches, to heed to the President's call for the suspension of large gatherings in the country and to take part in the National Day of Fasting and Prayer on Wednesday, March 25, 2020, as declared by the President. He also asked other churches to follow the CoP's example by going the extra mile to provide tangible support in dealing with the situation. He assured the church that the items donated would be used for the purpose for which they have been given.

Also present at the meeting was the International Missions Director (IMD) of the church, Apostle Emmanuel Gyesi-Addo.

In a related development, the Chairperson of the Nursing and Midwifery Council of Ghana, Rev. Veronica Mina Darko, on behalf of the council, also donated 50-sets of personal protective equipment to the tune of GHS 20,000.00 to the MoH for onward distribution to health officials across the country. 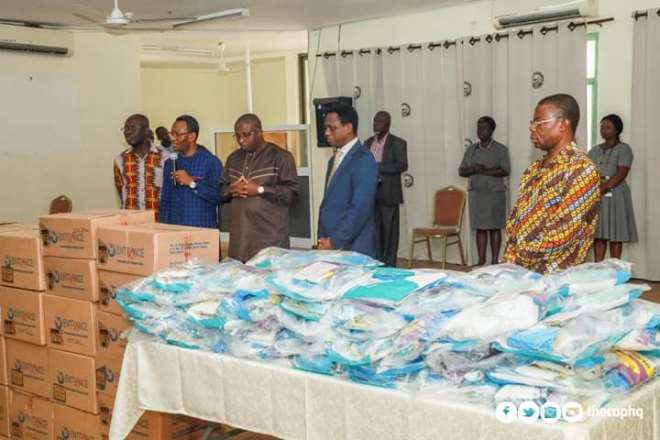