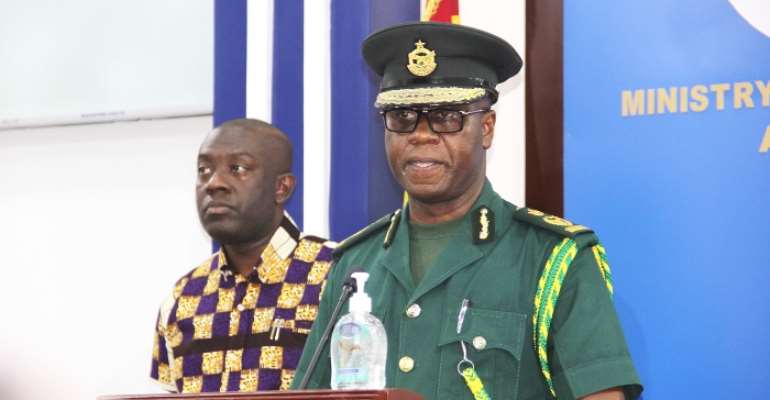 Following the closure of Ghana’s borders to curb the spread of the coronavirus in the country, the Ghana Immigration Service has quelled multiple attempts by Ghanaians and foreigners to enter the country illegally.

All borders were closed on midnight of Sunday, March 22. Ghana’s coronavirus case count has risen to 52 since then.

Addressing the press on Tuesday, Laud Ofori Afrifa, the Deputy Comptroller-General of the Ghana Immigration Service, cited the Aflao area as having seen “various attempts to enter the country illegally.”

Among those intercepted, there were seven Nigerians; four men and three women “who were sent back across the border to Togo” on March 22.

Also, an American national who had crossed over from Togo was picked up by immigration personnel after he landed at the Lome airport on March 20.

The American national has since been referred to health officials and is “under arrest and detention and being sent into mandatory quarantine.”

“Further action to take on him will be announced in consultation with the legal authorities,” Mr. Afrifa added.

Of concern to the state is that local communities were aiding people to enter the country illegally, Mr. Afrifa also stated.

He revealed that 12 Okada riders were arrested “for attempting to smuggle things across the border” at Aflao.

At the Sogakope inland border, a Ghanaian doctor who flew in through Lome from the US “and entered illegally” was also intercepted.

“Ethiopian Airlines continues to fly to Lome so we are watching that border post very closely because that is where we are seeing the tendency of persons mobbing through,” Mr. Afrifa said.

Two Ivorians who hired vehicles from Aflao border and were moving to Accra were also arrested.

“Drivers of vehicles have also arrested and they are all being sent to mandatory quarantine and thereafter, the issue of prosecution will be considered.”

At Elubo, 21 persons; five Ghanaians, nine Beninois, three Nigerians, a Malian and three Ivorians, were intercepted with the foreigners being sent back across the border.

Up North, Mr Afrifa said there were attempts by Nigeriens and Burkinabes to get out of the country in buses but “they have been stopped.”

The Deputy Comptroller-General ended his address by urging Ghanaians in border towns to cooperate with the border control measures amidst the pandemic.

“We are not in normal times so the manner they have been operating in conspiring to smuggle people out of the country should cease…they should rather inform us of illegal entries rather than aiding them,” he warned.

Aside from this update, Togolese nationals were arrested at the Tatale border attempting to cross with motorbikes at unapproved routes.

Ghana currently has 14 approved entry routes into the country.