Lest We Forget, The Hearing Impaired Need To Hear The President Speak 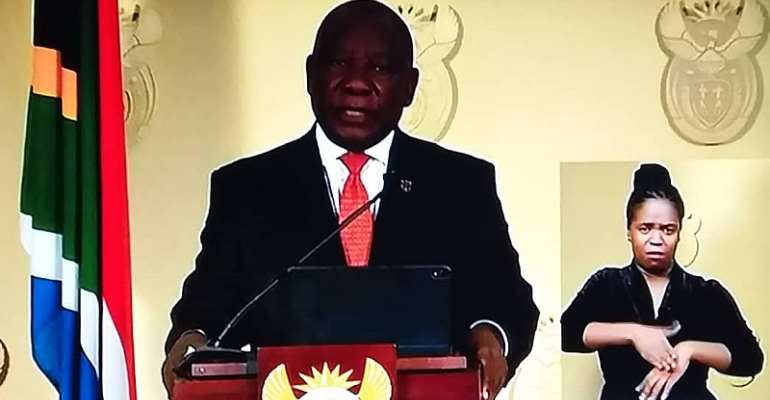 It is sad to recall that on all the three occasions that the President of the Republic has addressed the nation on the coronavirus outbreak live on TV those with hearing impairment were excluded from being the first-time hearers of his message.

In the last episode, for instance, the President’s address coincided with a similar live telecast by Prime Minister of Spain and the French President who spoke to their countrymen and women on the same deadly coronavirus but the scenario was different. Conspicuously standing by the side of these leaders were persons who used the sign language to interpret perfectly and concisely, their message for the benefit of the hearing impaired as well. It was a sight I so much revered.

No one can doubt the impact the President’s message did have on the intensive sensitization of the public on how to stay protected from the strange disease and how the country plans to fight the pandemic. Nonetheless, the impact would have been greater if the majority of Ghanaians expected to benefit from the Presidential dissemination of information on the “global curse” had included the hearing impaired. One should not forget that in the war to rid the world of the scare, one person can even make a whole difference either for better or for worse. This forms the basis of my worry. Excluding the hearing impaired from national broadcasts is certainly not the best.

All nations of the world are engaged in a war in which nobody, Persons with Disabilities (PWD’s) included, should be left behind. If any nation does exclude any section of society in an effort to especially, educate the public on the Covid 19, that country does so at its own peril because as I stated earlier, a single person can make the difference in the efforts to tame the pandemic.

Persons with hearing and speech disabilities do not feel comfortable with the existing situation where “there is a huge communication gap which hinders their development.”

This concern was expressed in 2004 by Mr. James M. Sambian, Director of Ghana Association of the Deaf in a letter he wrote to government and policymakers on what he described as “the seriousness of the exclusion of persons with hearing impairment from the dissemination of information in the public domain.”

Mr. Sambian noted that “communication is the major challenge facing persons with hearing impairment. Compounding this challenge is the lack of proficient sign language interpreters who form the essential plank between the deaf and hearing. Sign Language Interpreters play a vital role in helping deaf people gain information, education, healthcare, entertainment, employment (formal and informal) and many other services that hearing people take for granted.”

In the letter, Mr. Sambian further called on “policymakers and duty bearers to consider sign language to be a part of the curriculum in all public basic schools.”

He explained that, “by the time the young ones complete basic and secondary education and go into employment or their chosen professions, they would be able to communicate with everyone including persons with hearing impairment thereby, subduing the services of sign language interpreters to advance and complicated situations.”

Given the circumstance one can even add that we can in future” export” some of these trained sign language experts to countries where their services would be much needed. We should not forget that the same situation we face here where the deaf and hearing impaired are marginalized exists in several countries around the world and may be looking for a solution.

What restrains us from exploiting the situation by training as many sign language experts as possible? Were we not told the other day that the government had entered into an agreement with Barbados to export nurses to the North American country?

With the free senior high school education, we are going to have a multitude of school leavers yearning for jobs which to all intents and purposes, would not be existing. So the big question is after school what’s next? Engaging them to do something purposeful should be planned well ahead before they leave school. As we all know, the country’s universities both public and private cannot absorb them all due to obvious factors.

As Ghanaians we should not hesitate to consider the hearing impaired who are part of the Persons With Disabilities (PWD’s) fraternity in formulating policies but sadly they appear not to have any voice to speak for them at the national decision-making level.

The exclusion of the deaf from public information dissemination and national discourse, in general, is not in anybody’s interest. It rather draws us back as a democratic nation, especially in our sustainable national development efforts. Under the UN Sustainable Development Goal 10, PWD’s are to benefit immensely from reduced inequalities in any form. This should remind us to include the deaf and hearing impaired in our national mobilization efforts.

I have acquainted myself with some hearing-impaired persons, some of who are close family members, and I know too well how they feel about their exclusion. They are not happy that their interest is totally ignored in most national discourse with the most recent being the series of Presidential addresses to the nation on the deadly coronavirus.

Let us all hope that they would be considered the next time the President speaks to the nation. How nice it would be to see a sign language interpreter on our TV sets set standing beside the President as he addresses the issue of the deadly COVID-19 pandemic.

Oprah Yaa Korkor Anakwah is a student at the University of Ghana.