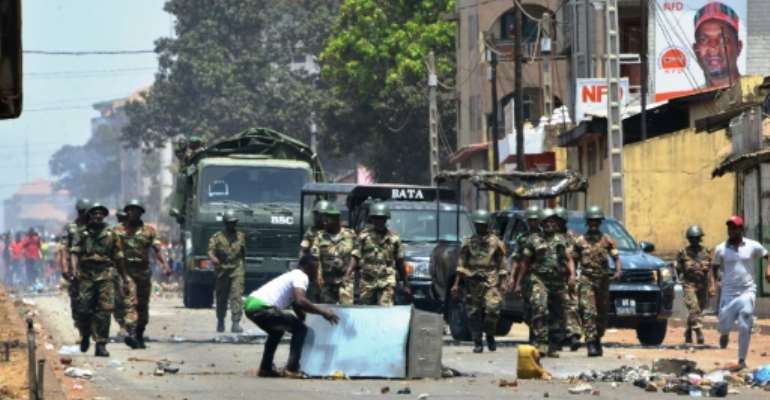 Protesters confront the Guinean army in the streets in Conakry on March 22, 2020, during a constitutional referendum in the country. By CELLOU BINANI (AFP/File)

Sporadic clashes broke out on Monday in the Guinean capital of Conakry, the day after a bitterly-contested constitutional referendum marked by deadly violence, an AFP reporter saw.

Youths and security forces firing live rounds clashed in the districts of Wanindara, Cimenterie and Cosa in a city where traffic and commercial life was greatly muted.

At least 11 people were killed on Sunday, according to opposition activists, during a referendum to change the constitution.

The authorities said two people had died, one "by accident and (the other) of heart attack" in "various acts of violence and clashes between militants".

President Alpha Conde, who in 2010 became the West African country's first democratically-elected leader, wants to change the constitution, arguing that this will enshrine gender equality and introduce other social reforms.

But his opponents say the real motive is to reset presidential term limits, allowing Conde, 82, to run for a third spell in office later this year.

Thirty-two civilians and a gendarme died in violent protests in the months before Sunday's vote.

The opposition had called on the public to not only boycott the referendum but prevent it from taking place.

By Monday evening, the authorities had yet to give official figures on the turnout or a date when the results would be published.