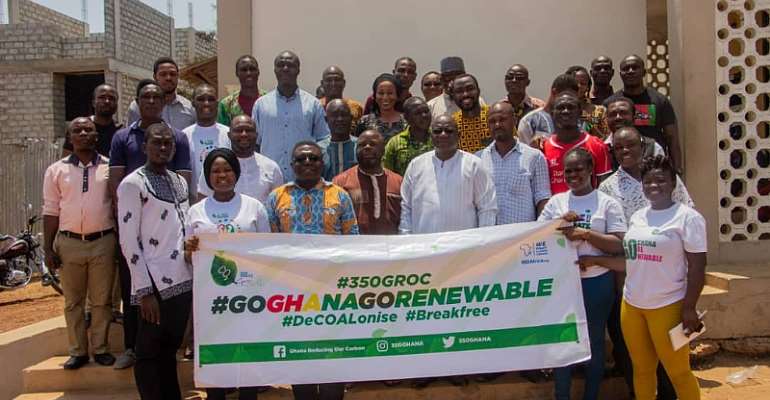 Captured under sustainable development goal 7, renewable energy according to experts is the most viable alternative source of clean energy for the world. Earlier analysis of future energy pathways shows that, it is technically possible to achieve improved energy access, air quality, and energy security simultaneously while avoiding dangerous climate change. In fact, a number of alternative combinations of resources, technologies, and policies are found capable of attaining these objectives.

However, in order for these policies to be achieved, there is the need for strong partnerships between Government, Civil society organisations and the private sector. Due to this, 350 Ghana reducing our carbon, a formal youth group that advocates for the reduction of Ghana’s carbon emissions, and promote renewable resources as a key effort to combat climate change, has organised a workshop to train assembly members and workers of the planning department in Ashiaman municipal assembly on how to inculcate renewable energy into their medium-term development plans.

In attendance was the municipal chief executive of the district, honourable Albert Okyere who in his speech, acknowledged the need for Ghana to harness its renewable energy potential,

“Not every country has the amount of sunlight Ghana has, so it is time for us to introduce into our own lives, new areas that are not new to nature. And to take fullest advantage of what we are endowed with, freely. We want to encourage members to take keen interest in these areas as we go through the discussions”, he said.

The groups lead coordinator for the area’s project, Patricia Bokoe, was however impressed, with the work her organisation is doing to promote renewable energy in Ghana.

She added, that Ashiaman municipality is not the only beneficiary of the project, “Our aim is to be able to organise such workshops for all district assemblies in Ghana, but we are currently focusing on 5 districts in Accra for now. Earlier this year, we organised this workshop for Ayawaso and Adenta municipal assembly, so Ashiaman is the third district to have benefitted from this project. But we are not done yet, we will be taking this project to the Amasaman municipal assembly and Accra metropolitan assembly”.

Amongst the assembly members that took part in the workshop was honourable Emmanuel, assembly member for Tenkpa electoral area, who expressed his profound gratitude to the Non -Governmental Organisation for holding such an educative workshop for them. He entreated his colleague assemblymen and women to practicalize the things they have learnt and be the champions of renewable energy in their respective assemblies.