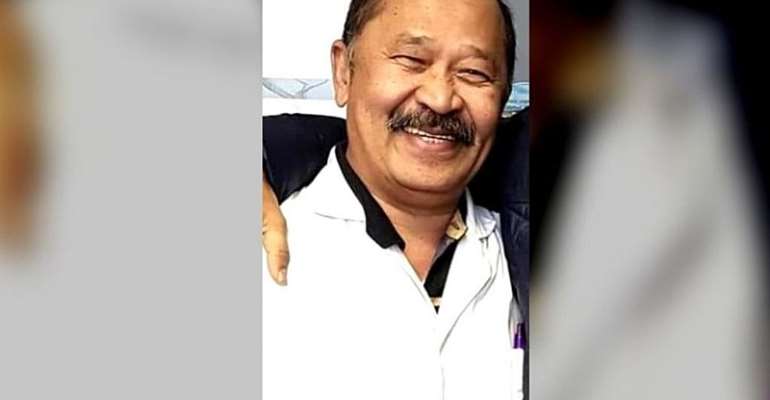 The staff from Compiègne hospital in the Oise department, (Hauts de France), gathered on Monday to publicly pay their respects to Jean-Jacques Razafindranazy, the first doctor in France to die from Covid-19. He is the third French doctor to die over the weekend.

At the end of February, the  67 year-old retired doctor Razafindranazy, came back to the emergency ward of Compiègne hospital, 84 kilometres north of Paris, to give his colleagues a hand.

L'Oise department was the epicentre of the coronvirus outbreak in France. The first patient, a 60 year-old teacher ,was first hospitalised there.

The man, who suffered from respiratory problems, and tested positive for the coronavirus, later died after being transferrred to a hospital in Paris.

Extraordinary case
According to France Info, Dr Razafindranazy was hospitalised himself on 4 March in Lille, where he tested positive for Covid-19.

His health deteriorated quickly 10 days later. He died on Saturday 21 March, without being able to say good bye to his family.

Doctors told his daughter that medication was having no effect at all and that it was "an extremely serious case, out of the ordinary."

According to a France Info journalist at the scene, one hundred or so staff members at Compiègne hospital turned out to pay their respects, in front of the hospital on Monday.

One doctor expressed his wish that this kind of sacrifice would make people understand how important it is to respect the confinement measures in place.

"I send my warmest thoughts to your wife and children," he said addressing the group, "my support also goes out to the teams of hospital workers, in particular, those in emergency wards."

"You will always be in our hearts and minds. Rest in peace."

First evening curfew in France
Compiègne has announced a curfew from Monday evening, banning any movement between 10pm and 5am. This measure is to stay in place until at least the 5 April. Nogent-sur-Oise and Creil, two other towns in the Oise region will also follow suit as of Monday evening.

Meanwhile, messages of support were pouring in for Jean-Marie Boegle, a gynocologist who worked in Mulhouse, and who died on Sunday 22 March from coronavirus.

French gynecologist dies from virus
France 3 Television reported that Dr Boegle had gone to his holiday home near Dijon (Côte d'Or) in the Burgundy region of France two weeks ago, to get some rest.

Tired, and suffering from other health issues, he decided to get tested for coronavirus. He tested negative the first time, however, a week later, he tested positive for Covid-19. He went in to a coma and died on Sunday.

Gynecologist Bernard Servent, a retired gynecologist at the Diaconat clinic in Mulhouse, expressed his regret at losing his former colleague.

"He was friendly, joyful, funny and very easy to like," remembers Servent.

Fondly remembered
Boegle had opened his own clinic, but continued to help with births at the Diaconant-Fonderie Clinic, where he was working until March 12th.

Women who had given birth with Boegle's help also flooded social media with messages and condolences for the family.

"He was a wonderful person, appreciated by his patients and colleagues alike.My thoughts and prayers go out to his wife and children," wrote patient Sonia on Facebook.

Third medical doctor dies
On Sunday, a third doctor in France, 60 year-old Sylvain Welling, died at the Saint-Avold hospital in the east of France (Moselle) where he was being treated for severe respiratory difficulties, according to local media.

It has not yet been established if he had tested positive for Covid-19.

According to the latest figures published by the health agency of the Eastern Region, on Sunday, there were 1,977 people hospitalised due the coronavirus and 271 deaths reported since the beginning of the epidemic.

A military field hospital has been set up in the region to help deal with the number of serious cases.