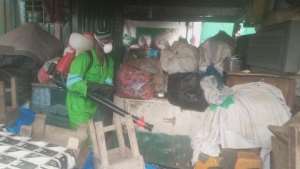 The Ministry of Local Government and Rural Development (MLGRD) in collaboration with the Accra Metropolitan Assembly (AMA) Monday commenced a fumigation exercise within markets and streets in Accra to get rid of harmful insects and pests.

The “Emergency disinfection exercise” commenced around the 0900 hours in many areas including the 31st December Makola, Agbogbloshie, Accra Tema Station, CMB, Timber, Okaishie and Tudu markets.

The initiative, which is aimed at disinfecting 137 markets in the Greater Accra Region alone, is expected to be replicated nationwide.

Many markets, especially within Africa due to their congested and unhygienic nature, sometimes become comfortable habitats for harmful insects and animals such as mosquitoes, cockroaches, mice and snakes which could be vectors for diseases.

Therefore, entomologists recommend that fumigation exercise be done at least once every three months to get rid of pests and insects as they could be deadly and cause severe harm to the health of humans and properties.

The exercise was a step to adhere to the President's directive for the MLGRD to coordinate with the Metropolitan, Municipal and District Assemblies (MMDAs) to enhance the conditions of markets across the country.

The directive followed confirmed cases of the novel Coronavirus disease (COVID-19) reported in Ghana and the quest of government to control its spread.

Hajia Alima Mahama, the Minister of MLGRD on Friday, March 20, 2020, during the unveiling of fumigation and hand washing equipment for distribution to markets across the country, told the media that the exercise would replicated in 16 administrative regions of the country.

On Monday morning, the Ghana News Agency observed the closure of all shops and commercial activities within the streets and markets in Accra.

Most of the traders in the markets covered their items, anticipating the fumigation exercise.

But the streets; especially around Tudu, Makola, Rawlings Park, CMB, Accra Tema Station, Accra Post Office, and Agbogbloshie, were scattered with garbage as a result of the previous days' commercial activities.

The GNA also observed some workers of Zoomlion cleaning some streets after they had been fumigated.

Mr Mohammed Adjei Sowah, the Chief Executive of the AMA, told the Ghana News Agency that the MLGRD and the Assembly were not only concerned about sanitizing the markets but the health and lives of the citizenry.

“As we undertake this fumigation exercise, we take into consideration the health of people who will buy and use the foodstuffs here,” he stated.

“So we don't want to expose any food items to chemicals. Any trader who has left edible items uncovered, we cover them before spraying.”