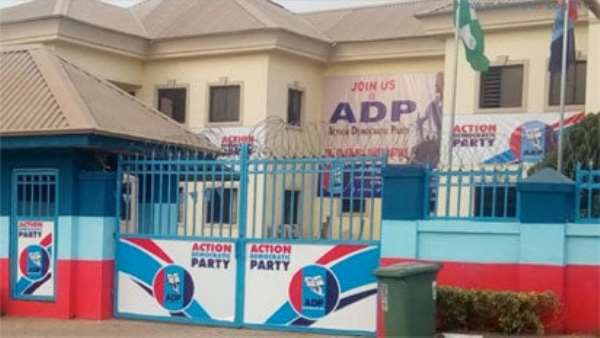 The Action Democratic Party (ADP), has suspended its 'physical contact' political activities across the country, with immediate effect, due to the Corona Virus pandemic, which has claimed the life of a Nigerian, with several other cases reported across the country.

ADP's suspension order was in line with the decision reached by the National Working Committee (NWC) of the party on Monday In Abuja, which only allows staggered activities through online mode in case of any emergency.

The party called on all her members in Nigeria and across the world, where it has chapters, and partners to remain cautious and observe all the precautionary measures outlined by the World Health Organization (WHO), National Center for Disease Control (NCDC), and other relevant health organizations.

This was contained in a Statement made available to newsmen by the National Publicity Secretary of the Party, Prince Adelaja Adeoye on Monday, he noted that, it is important for all Citizens to be vigilant and avoid physical contact at this time, urging them to take social distancing, hand washing and other hygienic habits very seriously.

According to ADP, this is not a time to blame the government or wants to make political capital out of the pandemic, urging that all hands must be on deck to be able to contain the pandemic as quick as possible. At this time, the cooperation of all religious, traditional, youths, men and women are needed in order to be able to push back this disease.

He stressed the need for governments at Federal, State and at all levels to make available test kits, sanitizers and immediately begin trainings for local health workers, who can join in helping to combat this outbreak at the metropolis and rural areas.

ADP advises the Federal Government that, in addition to the restriction order, all the entry points into the country must be fully fortified by security and health workers, to be certain that all those coming into the country must undergo a compulsory thorough medical screenings. Those in the market places must be orientated on the needs to wear hand gloves, nose masks and other preventive kits in order to avoid the spread of the virus.

The party stated further that, the Federal and State governments must provide succor for Nigerians at this time, as many of citizens will be at home due to the shutdown order, which is gradually creeping into the daily activities of most Nigerians.

"What is important now is the food security of citizens, and the government should take a proactive measure in this regard, so as to avoid death of many who relies on what they make daily and may not be able to make their daily income anymore", Adelaja added.

The party said the Buhari led goverment should make it a matter of importance that, Electricity distribution to all homes across the country be increased, because this will afford citizens to have access to authentic news, which will further help in the awareness against the diseases and reduce the heightened tension and fear being experienced by some Nigerians.

The party urges the Federal government led by President Buhari and State governments to set up more specialized hospitals, test and isolation centers, across the country to enable victims have access to quick treatments since the few existing ones seem to becoming overstretched, he concluded.