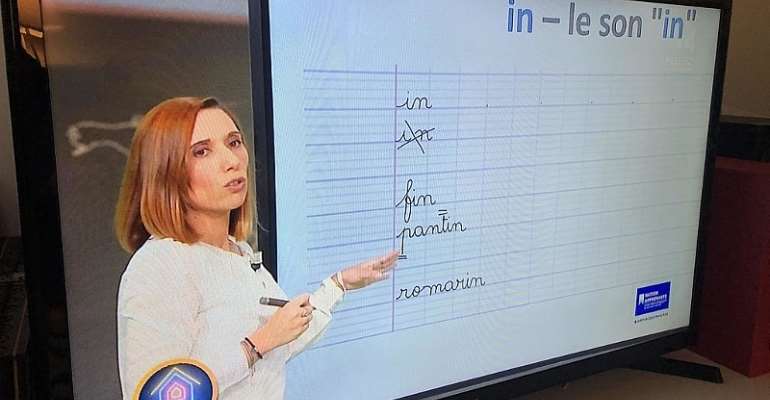 Exactly one week after the closure of all schools and universities across France in a bid to mitigate the spread of the coronavirus, the broadcast of educational progamming began on the France 4 television channel nationwide this Monday. Since the shutdown, the implementation of home education measures has been an ad-hoc affair with schools around France encountering logistics issues specific to their location, size and connectivity.

The reality of what lies ahead for France's schooling system, on lockdown since the beginning of last week, was outlined by Education Minister Jean-Michel Blanquer on Sunday - in a “best case scenario” students will not be returning to their classes before 4 May.

However, any decision to re-open schools, colleges, lycées or universities is dependent on the evolution of the coronacvirus

When asked whether the school year could be prolonged and school holidays pared-down, the minister replied “hitting the [summer break] is not the goal.”

Yet the confinement of students to their homes is raising questions about the feasibility of holding end-of-year exams such as the baccalauréat.

Blanquer's announcement came ahead of today's nationwide launch of the Lumni education platform on France 4 to assist with pre-school, primary and secondary students to keep up with their exercises. Operation Nation apprenant (Learning Nation in English) proposes a series of live broadcasts, podcasts and videos, spearheaded by France's Ministry for Education.

The move follows a chaotic week among teachers and educational institutions across France, trying to come to terms with how to ensure the continuity of the school curriculum as classes are indefinitely cancelled.

According to one high-school teacher in the city of Tours, about 200km south-west of Paris, Marie said “at the beginning of the week it was chaos. I had to reply to around 120 individual emails from students who were totally lost or didn't understand the information being given out.”

The implementation of distance learning by some 850,000 teachers across the country has never been done before and it became clear from the outset that it was going to be a time consuming exercise.

To ensure the continuity of France's curricula on lockdown, the National Centre for Distance Education has given open access to its online resources, with exercises, “virtual classes” and video-conferences available to teachers and students alike.

“I had to prepare all the documents, all the teaching structures that I don't normally need in the classroom, between Monday and Wednesday evening. I worked over 30 hours just organising the distance learning classes for the children… it was less than easy,” Marie added.

Little by little, the new system began to fall into place, yet many students have found themselves in a situation that they're not the only ones who need the only computer in the household. Brothers and sisters also need to continue their studies online, and that can throws everyone's homework deadlines off balance.

However, for all this to be work seamlessly and equitably, connectivity becomes an issue. For Sarah, a teacher at a lycée in Ariège, situated in the heart of the Pyrenees mountain range, staying connected all week has been impossible. “We realised very quickly that the system couldn't support such a volume of virtual interaction and data transfer that was needed between teachers, to ensure the support and solidarity we need. So we've looked to other tools that are outside the national education system. There you go. Never mind.”

So following the school closures, logistical somersaults, online educational databases and distance learning tools made available for France's teachers and students, how have these measures been received by the pupils on the ground?

I asked my 8 year old son Evan what he thought about learning under lockdown.

David Coffey:Tell us about the first class that you saw on TV today. Did you like it?

Evan:Yes, I liked it. It was good, they had maths and they also had writing and stuff like that. It was good but not as good as school as I go to during the week.

David:You'd prefer to be in school? Evan: Yeah. David Coffey: Why? Do you miss your friends?

Evan:Yeah. David Coffey: On a day to day level, getting out of bed and going off to school…. it's always a bit of a hard task... do you not prefer just being at home?

Evan: Well, with the getting out of the bed, I agree with you, but I prefer going to school because you don't have to work at home… you can take your time at school. School is like five times better than home.

David Coffey: Now we've had the Minister of Education who said that you won't be back we'll probably won't be back in school until the fourth of May at the earliest. Is that a good thing or a bad thing for you?

David Coffey: Okay. So it means your social life has been severely disrupted?

Evan: Well, yeah. And as with all children of his age, the hardest part of the lockdown is the lack of interaction with his peers. And of course the priority of having a decent birthday party, which indeed will have to be "post-poned until further notice". An expression we're all getting used to after almost 1 week since the restrictions were introduced to contain the spread of CoVid-19.