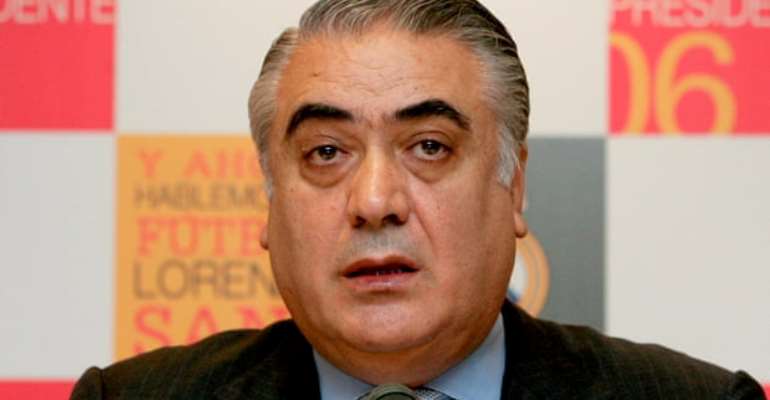 Lorenzo Sanz in 2006, when he attempted to become Real Madrid president for a second time. Photograph: Bernardo Rodriguez/EPA

Lorenzo Sanz, the president who led Real Madrid to the 1998 European Cup after a 32-year wait, has died aged 76 due to coronavirus.

Sanz, who had initially chosen to stay at home so as not to contribute to the saturation of Spain’s beleaguered health service, was admitted to hospital on Tuesday after eight days of fever. A test carried out there confirmed he had contracted Covid-19. As well as respiratory problems he suffered kidney failure because of an infection and died on Saturday night.

Sanz’s son Lorenzo Jr, who played basketball for Real Madrid , had informed people of his father’s worsening condition on Wednesday night. “We have to wait 24 hours but because of his age the situation is very complicated,” he wrote on social media. “The hardest thing is not being able to see him.”

On Saturday night Sanz’s other son, Fernando, who played football for the club, announced his death. Sanz becomes the first high-profilecoronavirus fatality in Spain, adding to the 1,326 that had been confirmed by the government at midday.

A former director, Sanz became president of Real Madrid in 1995 and served until 2000. He signed players such as Davor Suker, Pedrag Mijatovic, Roberto Carlos and Clarence Seedorf for the club, as well as Steve McManaman and Nicolas Anelka, making the Frenchman the most expensive player in the world at the time when he joined for £22.3m from Arsenal in 1999.

In 1998 Madrid finally won the European Cup for the first time since 1966, beating Juventus 1-0 in the final in Amsterdam thanks to a goal from Mijatovic. The séptima, or “seventh” – always referred without needing to mention the competition itself – sparked the biggest sporting celebrations the city had seen with an estimated half a million people on the streets. Two years later Madrid were European champions again but that same summer Sanz lost presidential elections to Florentino Pérez. Sanz also presided over one league title, a Spanish Super Cup and an Intercontinental Cup.

Sanz is survived by his wife, Mari Luz, his sons Lorenzo, Francisco and Fernando and his daughters Malula and Diana. In a statement, Real Madrid said they would pay homage as soon as the health crisis in Spain allowed.