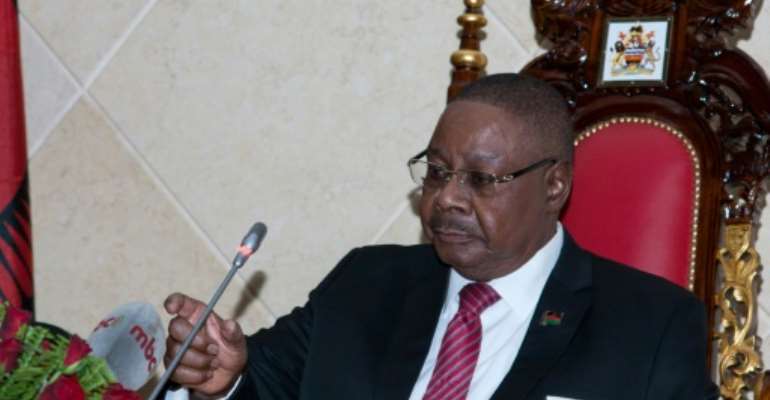 Malawian President Peter Mutharika is refusing to sign election reform bills ahead of the re-run of last year's vote. By AMOS GUMULIRA (AFP)

Malawians will return to the polls on July 2 for a presidential election re-run ordered by the country's top court, which annulled last year's vote results because of irregularities, the electoral commission announced Monday.

"Following the Constitutional Court ruling on February 3 that nullified the presidential elections and ordered that there should be fresh elections, the commission... therefore announces that the elections will be held on 2nd July," electoral commission chief Jane Ansah told a news conference.

In a landmark ruling last month, the Constitutional Court overturned the outcome of the May 21 election, which handed President Peter Mutharika a second term in office.

The court said the poll results were fraught with widespread irregularities -- in particular the "massive" use of correction fluid on tally sheets.

It ordered the holding of fresh polls within 150 days, but Mutharika is appealing the ruling.

His petition will be heard by the Supreme Court starting April 15.

The president has so far refused to sign off proposed electoral law amendments that require a more than 50 percent majority to secure a second term.

The proposed victory threshold is a major sticking point for Mutharika, who was declared winner with just 35.8 percent of the vote.

Ansah said if the president does not approve the new laws before polling date, the electoral commission would press ahead and organise the election on the basis of existing laws.

To boost their chances in the next vote, of the country's two main opposition parties last week inked an electoral pact.

The Malawi Congress Party (MCP) and United Transformation Movement (UTM) -- which came second and third respectively in last year's polls -- signed an electoral alliance at a ceremony attended by thousands of supporters in the capital Lilongwe.

On his side, Mutharika's Democratic Progressive Party earlier this month partnered with the small opposition United Democratic Front, which placed fourth last year.

The impoverished southern African country has not yet recorded any Covid-19 case, but there are fears the spreading virus could threaten the staging of the fresh elections.

"The successful implementation of the election calendar will be subject to mitigation of the impact of the coronavirus including travel embargoes and shutdown of election materials production companies," said Ansah.

It is the first time a presidential election has been challenged on legal grounds in Malawi since independence from Britain in 1964 and only the second vote result to be cancelled in Africa after the 2017 Kenya presidential vote.