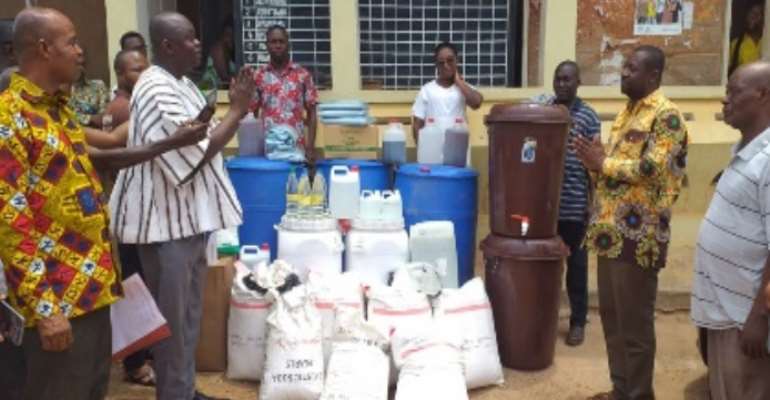 DCE, (Left) Handing Over Items To Head Of Pharmacy Of The Hospital Opposite Right

To effectively ensure proactive measures to fight the coronavirus disease (COVID 19) at the District level, the Dormaa East District Assembly on Friday, March 20, 2020, made available to the District Hospital Personal Protective Equipment (PPE) as well as chemicals for the domestic preparation of hand sanitizers among other disinfectants.

The PPEs include facial masks, protective clothing, wellington boots, hand gloves, and others.

The items, wealth twenty thousand Ghana cedis, (GH₵20,000) was presented by the District Chief Executive, Hon Emmanuel Kofi Agyeman to the Pharmacy Department of the Hospital for the production of 500 liters of Chlorinated bleach solution, 500 liters of Dettol, 560 liters of hand sanitizers and 150 liters for Saline antiseptic solution.

The finished products which are expected by the close of the weakened would be shared among the hospital, health directorate and other departments and agencies of the District Assembly.

In a press briefing, the District Chief Executive explained that the presentation is part of other strict recommendations directed by the District Public Health Emergency Committee being implemented by the Assembly to successfully manage the situation on hand.

He also outlined other directives which have already been adhered to in the fight against the menace to include the distribution of Veronica Buckets to all markets, lorry parks and public places as well as the enforcement of ban of every sporting activities such as card/draft joints, children playing together, keep fit clubs and any other, which pulls crowd.

He added there has as well been the formation and inauguration of Area/Town Council Taskforce on COVID 19 to ensure the compliance of President’s directives on all social gatherings especially that of funerals. According to him, the taskforce would as well monitor and identify citizens from abroad who enter the communities and also assist in the education campaign. He also reiterated the formation of a District Taskforce which would patrol and enforce the adherence of the president’s directives and sanction defaulters.

The DCE said, the menace is deadly and has the potentials of wiping every life under the sun, and everyone needs to border about it and join the rescue mission to fight it by complying with directives put down by central and local authorities, ensure self-discipline and observe prayers.

He gave a deadline ultimatum to shops, and institutions yet to comply with the precautions of providing running water, soap, and sanitizers for washing of hands up to Wednesday, March 26, 2020, to comply to avoid closure.

The Head of Pharmacy at the District Hospital, Mr. Frank Adansi- Pimpim, who received the items, was grateful to the Assembly for their rapid response. He said the items would go a long way to support their frontline health workers and activates at isolated centers created at Dormaa Akwamu should they suspect or record the disease.

A team from the Health Directorate at the press briefing demonstrated the proper way of handwashing and sanitizing. They encouraged the use of alcohol-based hand sanitizers and personal hygiene and cautioned the public to be aware of fake hand sanitizers in order not to worsen the situation.