Thoughts Of A Nima Boy: We All Can Give Of Ourselves; OP Studios Shows The Way At Rising Star Orphanage, Dodowa 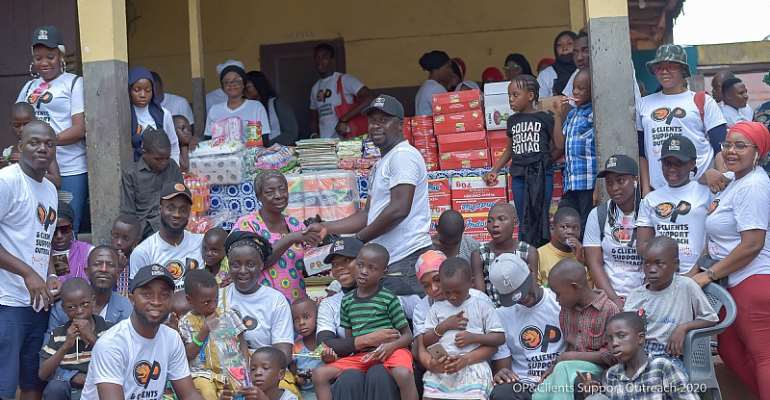 I do not know about you but issues of poverty leave me awe-stricken. It humbles and benumbs me. Discussions that have to do with the horrors of deprivation put me in a melancholic state. Poverty indeed is a disease both lethal and terminal. I have always held the view that there is no nobility in poverty. And I am not sure there will ever be.

A few days ago, I saw the video of a fully grown man broke down into tears after he was given six hundred Ghana cedis by Ibrahim Oppong Kwarteng of Crime Check TV fame. This was after the man, a father of three confessed that he does not have a four hundred cedis of his own after years of hawking dusters in the streets of Accra. What got me tearier was his statement that his entire capital was a hundred and twenty cedis. I thought that was the height of poverty until I joined Habib Lanry for his outreach at Rising Star Orphanage Home at Dodowa. Over there I got to realize that poverty is not only an abstract noun but can be the most concrete of nouns. In fact, one could, feel, see, smell and touch the poverty there.

Habib Lanry is one of the few guys who have decided to take photography to atmospheric heights. He has vowed through his actions to make photography a great and dominant field of endeavor far beyond the station of common photographers who have always been referred to as “fotoo”. He established his Op studios which in his own words “has been in existence for the past seven years during which time, they have helped to capture memorable milestones and moments in the lives of their clients.”

But this piece is not about his photography. It is not about the great number of young people he has trained to become entrepreneurial photographers. I am not writing to glorify his status as a giant in the photography industry in Ghana nor the sophisticated machines he uses to give life to his videos and photos.

I am stealing time here at work to tell you about his resolve. The resolve to give humanity back to children that have been crippled by circumstances of their births. I am writing to tell you about the wonderful spirit of altruism that he has carried on his shoulders to at least give the deprived and vulnerable in the society a chance to also live fully as human beings.

I am writing to let you know that there are people who realize the danger of a hopeless society, hence they have taken it upon themselves to be purveyors of hope. They understand perfectly what the poet meant when he said that without hope life is like a broken-winged bird that can’t fly. They have the realization that a human being without hope is better described as ‘dead.” I want to tell you about the Op and Clients Support Outreach.

Half a decade ago, Habib Lanry and his Op studios decided that they will not only capture the beaming smiles on the faces of clients with their cameras but will also help put smiles on the faces of others. They decided to restore dignity and some pride in children who are underprivileged. That is how Op and Clients Support Outreach was born. They have a firm belief that all children deserve to be loved, helped and given maximum protection because they are our future.

In March 2016, they visited the Hope of Life School and made a donation of cash and kind approximately Two thousand, five hundred Ghana cedis for the children. They did not rest there. The following year, with the help of over fifty supporters, they provided books, paint, gari, sugar, rice, soft drinks, toys, toiletries, provisions, etc. and an amount of one, thousand Ghana Cedis to the children of Nectar Home Foundation in Agormenya in the Eastern Region.

The 2018 edition was at Royal Seed Orphanage Home and with the help of benevolent supporters; Op Studios assisted the orphanage by building a chamber and hall self-contain house for the children which were estimated to about fifteen thousand Ghana cedis. They also donated foodstuff together with an amount of five thousand Ghana cedis.

In 2019, they brought three orphanages together at Osenase Orphanage home in Akwatia and gave them an experience they will never forget. They treated the children with great food, great music and quality time. They made donations of items including foodstuff, toiletries, provisions, and many items.

I joined them for the 2020 edition which happened on the 14th of March. The sea of participants I met that morning on the two buses was impressive. Indeed passion is contagious and one could sense that in the friends and clients of Op Studios who came out to give life to the young ones at the Rising Star Orphanage Home at Dodowa.

We rode on our buses in a wild and ecstatic mood until we got to our destination and saw the reality of life. We met children who have been beaten down so early in life to the extent that, to give them hope, a lie has been fed into them that their parents were abroad and have sent us to give them stuff and money.

We met some children who did not know what was happening around them because they are down with Down’s syndrome. Some are deaf, others are dumb, some are grown, others could barely walk but find themselves at the orphanage because their parents had dumped them after birth or died leaving them behind.

There is a special case of a boy whose mother is insane, gave birth and began growing him on a heap of rubbish until he was snatched from her to the orphanage. Interestingly food is served in rubbish before he could eat. No other packaging will make him eat until it was ‘garnished’ with rubbish. My heart sunk when I beheld that young boy who could be a great adult one day when given the right conditioning.

The rubbish orientation has seen massive improvement now. When the founder of the orphanage, Madam Victory Simpson shared these descriptions with us when she welcomed us my morale got battered completely. She was full of appreciation for the massive show of love and humanity to the children.

The Op and Clients Support Outreach 2020 had a very good time with the children. We held wonderful interactions, competitive games, beautiful dances, rap sessions, hand-washing lessons amidst plenty of food and drinks to eat and drink. In the end, the outreach left a great deal of items to the children. Bags of rice, oil, cans of tomato paste, spaghetti, Indomie, bags of maize, sacks of the almighty gari, baby diapers, toiletries, bales of clothes, shoes and sandals, tins of sardine, cartons of milk, play-toys, and biscuits.

What warmed my heart was the inclusion of study materials of books, pens, pencils, and erasers. That will help develop the fertile minds of the young ones; a realization I made when I interacted with some of them. To round it up, a cash amount of two thousand Ghana cedis was given to them and the walls of the orphanage were embellished with a colourful graffiti by Moh Awudu, the world celebrated artist.

We must salute Habib Lanry and the Op and Clients Support Outreach for this wonderful show of humanity and love to the less-privileged in the society. Perhaps Habib Lanry wants to leave us the message already stated by Edward Lindsay. He stated in his Guideposts that “nowadays, we think of a philanthropist as someone who donates big sums of money, yet the word is derived from two Greek words, philos (loving) and Anthropos (man): loving man. All of us are capable of being philanthropists. We can give of ourselves.”

Let’s all salute this wonderful initiative.

NB: The Writer is the Executive Secretary of the Success Book Club.