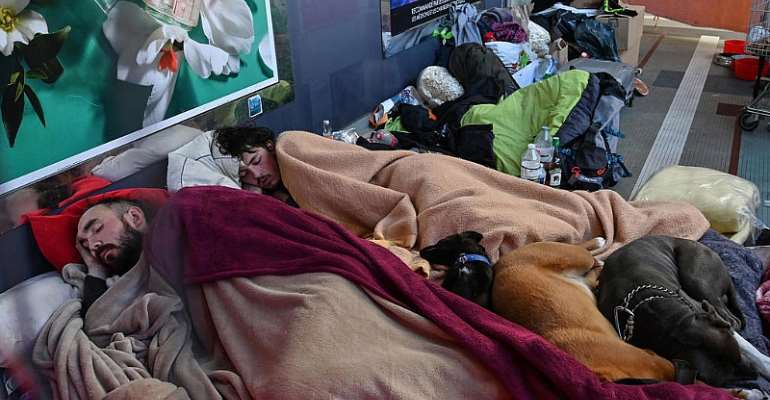 The plight of people living on French streets and in camps has been brought into sharp focus by the coronavirus pandemic. But how to get them to respect the lockdown when they have no homes to go to?

On Friday, police in Lyon, south-eastern France, fined dozens of homeless people for loitering on the streets as they tried to enforce a government lockdown to contain the spread of the coronavirus.

The fines drew the ire of rights groups, who put pressure on authorities to overturn the decision. They have promised to do so, but the incident highlights the confusion stemming from an order to enforce self-isolation on people who have no homes.

No strangers to precariousness, the living situation for homeless people and migrants has gotten worse since the start of the health crisis, France's main aid organisation Samusocial warned in a press release this week.

Even before the outbreak of Covid-19, many of them had it rough, with poor nutrition and access to adequate hygiene and healthcare.

"They are more at risk of developing health complications," Nathalie Goddard, head of advocacy in France for the NGO Doctors of the World, told RFI.

Race against time
Conscious of the risks, the government is racing to prevent the coronavirus spreading through and via a community that has been long ignored.

Housing minister Julien Denormandie, unveiled a financial package of 50 million euros to set up shelters for homeless people during the confinement period.

"Solidarity must not be a victim of Covid-19," he said.

The state has already prolonged its winter shelter programme that houses around 14,000 people, suspended all evictions and requisitioned hotel rooms to meet the demand.

More than 170 rooms will be proposed in Paris by the end of the week, and the state is also setting up two centres dedicated to accommodating homeless persons infected with the coronavirus but whose condition is not life-threatening.

The government has insisted upon shelters with individual rooms to reduce fears of the disease spreading through overcrowding.

No water for washing
While aid organisations have welcomed these initiatives, they regret the lack of information given to homeless people and migrants in dealing with the coronavirus, as well as the incongruity of some prevention measures.

"When you live on the streets or in a camp with no running water, you can't easily wash your hands or take advantage of free hand-sanitising gels," comments Goddard of Doctors of the World.

"And migrants can't avoid being close to each other because they live in crowded spaces. So, respecting the prevention is difficult. This is why they should be prioritised," she said.

Homeless and migrant support workers too want recognition. Their work may not be the life-changing stuff of doctors and nurses but it too comes with risks.

"Working outside with migrants and homeless people means it's very difficult to respect the instructions to stay at one metre, so we need protective wear," argues Goddard.

Most social workers don't have the masks and gloves that are being sent to health workers. This has led to a reduction in vital services such as food handouts and day shelters.

Preventing humanitarian crisis
"We have suspended our routine activities and concentrated on outreach activities to go to this public directly," says Goddard, all the while regretting new staff shortages.

"Our team has less capacity than before because a lot of our volunteers are retired people so they are also among those at risk."

Other aid organisations such as the Red Cross have also had to scale down their operations. The group's head in France, Jean-Christophe Combe told BFM TV that if the situation did not improve, the country was looking at not only a health crisis but a humanitarian one.

The Abbé Pierre foundation has warned that people on the streets stood the risk of starving to death due to reduced food distribution and soup kitchens available.

On Thursday, the government announced that 500 migrants living in a crowded shantytown on the outskirts of Paris would be resettled in "the coming days".

"These people have been living in long-running unsanitary and inhumane conditions, without clean water or food, because no aid truck can get to them," she explains.

"They should be rehoused immediately and put in clean shelters. Only then can prevention work."