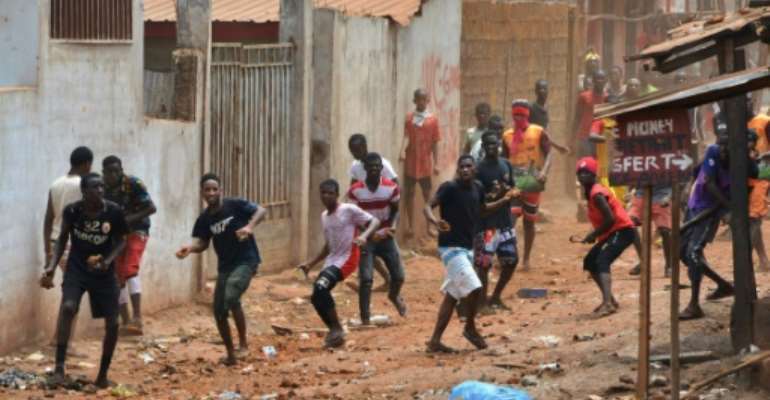 One person was killed and several injured as police fired tear gas in clashes with protesters in Guinea Sunday at the start of a bitterly-disputed referendum that critics say is a ploy by the president to stay in power.

President Alpha Conde, who became the West African country's first democratically elected president in 2010, is proposing a change to the constitution to codify gender equality and introduce other social reforms.

Shortly after voting began at 0800 GMT, young people attacked police deployed outside a polling station in a school in Ratoma, a suburb of the capital Conakry, according to an AFP reporter and other witnesses. In another school nearby, voting equipment was vandalised.

A 28-year-old man was shot dead and several others wounded in another Conakry suburb, Hamdallaye, the victim's brother confirmed to AFP. Officials did not respond to AFP's requests to confirm the death.

Clashes also broke out in Conakry suburbs of the Cosa, Hamdallaye, Dar-es-salam and Lambanyi where opposition youths tossed stones at police and gendarmes who responded with tear gas as they secured the voting stations, an AFP journalist and witnesses said.

Shots were also heard in some parts of Conakry, according to an AFP journalist.

Since October, Guineans have protested en masse against the possibility of Conde extending his grip on power. Sunday's death brings the total number of people killed in the protests to 32, along with one gendarme, according to an AFP tally.

Unrest also broke out on Sunday in Mamou in the centre, Boke to the west and in N'Zerekore, and protesters destroyed election material in regions to the south and northeast, according to witnesses.

Local officials did not immediately respond to an AFP request for comment about the unrest.

"I hope all transpires in peace and calm and that the Guinean people, as in 1958, will show their maturity," Conde said after voting in Conakry, making a reference to referendum that opened the way to independence from colonial France.

Critics also questioned the fairness of Sunday's vote, which is taking place amid mounting concern about the spread of the novel coronavirus in Africa, including two cases that officials reported in Guinea.

The governing party called for people to vote as one official, Fode Cisse, said: "We insist on the strict respect of health measures."

The government says it has now scrubbed the problematic names, after an expert team from the West Africa bloc ECOWAS urged it to last week.

"It is an electoral masquerade," he said.

A former opposition figure who was jailed under previous hardline regimes, Conde entered the record books when he became Guinea's first democratically-elected president.

He was returned to office by voters in 2015 for his second and final five-year term under the current constitution, but critics say he has become increasingly authoritarian.