By Françoise Ugochukwu - The Conversation 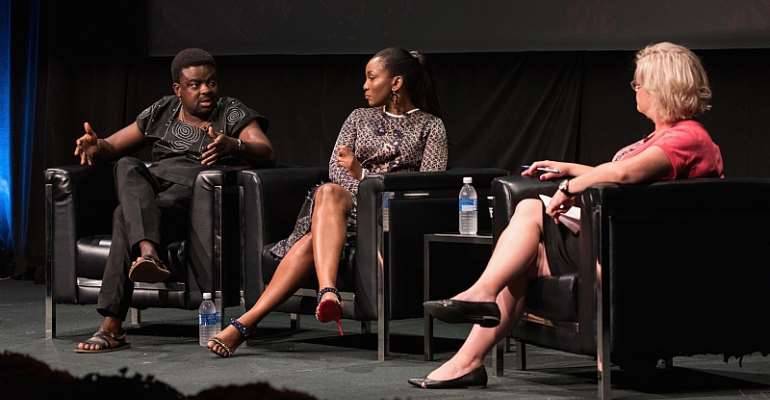 The Nollywood industry – which came to life in the early 1990s – is often seen as a natural heir to the Nigerian TV series which had already produced roughly 14,000 feature films in the previous decade. These video-films of the early years have now become full feature films, and an integral part of popular life in Nigeria. Local audiences appreciate these homegrown productions relating to daily life in the country.

The films – about 1,000 are produced a year – offer a mix of urban scenes and village encounters. They appeal to both young people and to families, reaching out to local audiences in several Nigerian languages. The films are mainly produced in the big cities in the south of the country such as Lagos, Onitsha, Enugu, Aba, Ibadan or Calabar, though they are usually set in Lagos or Abuja and involve crews and actors from various ethnic backgrounds.

While Yoruba and Hausa filmmakers have opted for productions foregrounding their respective languages, statistics show that the number of films in Igbo, the language most commonly spoken in Eastern Nigeria, has been infinitesimal. Most of the films emanating from Igboland are in Nigerian English, a choice which has allowed them to reach out to wider audiences in other parts of the country and abroad. This has made them an instant hit and projected Nollywood on the international scene.

The number of films produced in other Nigerian languages such as Esan, Edo (Bini), Urhobo, Ijo, Hausa and Ogba has equally gained momentum. Nigerian film director of the Nollywood film Stefan Heunis/AFP/Getty Images

Over less than three decades, Nollywood has gained an international reputation and inspired new film industries across Africa. The industry is widely considered as a showcase of the country. Interestingly, although a growing number of these films are now set in locations abroad, most remain firmly grounded in Nigerian cultures.

Over the years, the African public has come to discover and appreciate Nollywood. Nevertheless, outside Nigeria, its main public remains the Nigerian diaspora. Research carried out in London and Paris nine years ago sought out the opinions of Nigerians living abroad about the films.

The research showed that respondents spend a significant portion of their leisure time together with other Nigerians or other Africans, viewing Nigerian videofilms. They overwhelmingly preferred them to foreign films. These observations have since been enriched by follow-up interviews, confirming that these results remain relevant.

By and large, protagonists in Nollywood films adhere to ancestral beliefs and carry on with most rural traditions.

The ancestral village that nurtured these beliefs never disappears entirely. It is nearly always the scene of at least a few family encounters. The acknowledgements that follow the film give precious few details about the places used, such as community centres, hospitals or churches. The village is usually signalled by narrow paths, mud houses, grassy compounds and farmlands, people in wrappers, bare-chested men or chiefs in traditional attire and oja music.

The set is far less important than the content; it is just there to provide a background to the protagonists' actions and to reinforce the message that the individuals' behaviour is partly determined by their family background.

Both the 'old' Nollywood and its 'new' version that has developed within the past 20 years have highlighted the premium value still given to the concept of extended family, the bedrock on which most scenarios are constructed. Yet storylines point to the flaws of the traditional family system and reflect on the malaise experienced by a country in the throes of rapid changes, leaving traditions behind and often incapable of replacing them with new values.

Subjects woven into the plots include polygamy turned sour, marital infidelity and couples drifting apart, obsession with male heirs and problems associated with childlessness, and strained relationships with in-laws and with rural folks. A man passes by Nigerian movie billboards at a cinema in Lagos. Cristina Aldehuela/AFP/Getty Images

Films also denounce other social ills. These include the traditional maltreatment of widows, political corruption and some of the troubles associated with urban life.

All these topics appeal to a broad African audience and have helped to lead to African co-productions.

The crucial role of Nollywood in diaspora

Nearly half of those interviewed in my research said they preferred watching Nigerian films in English. A quarter preferred Yoruba while 16% preferred Igbo. Even so, over 58% of those interviewed considered that Nigerian languages played a role in the pleasure they derived from viewing films. They clearly perceived those languages as part of their cultural heritage and identity, a legacy to be cherished and protected.

Respondents equally considered their Nigerian language as a vital tool to communicate with older relatives in Nigeria and keep in touch with their roots. One of them says it beautifully:

It makes me feel more at home once I speak my language.

Unsurprisingly, language featured prominently in the list of what attracts viewers to Nollywood, second (50%) after the storyline (71.7%). Factors such as landscape and clothes, body language, houses and dances trailed behind.

Viewing Nigerian movies can therefore be seen and experienced as a trip down memory lane, a virtual journey back home and group therapy. A number of respondents also insisted on the educational value of the films, saying that “they have a moral tale to tell”.

Given the growing number of Nigerians migrating abroad in the current political climate, and given the proven benefits gained from regular watching as proven by my research and interviews, one cannot but encourage the current trend, which has seen a number of London and Paris cinema houses screening films belonging to the new Nollywood co-productions. Their recorded success will no doubt help Nigerians adjust to their diasporic situation while enriching the cultural scene of host countries.