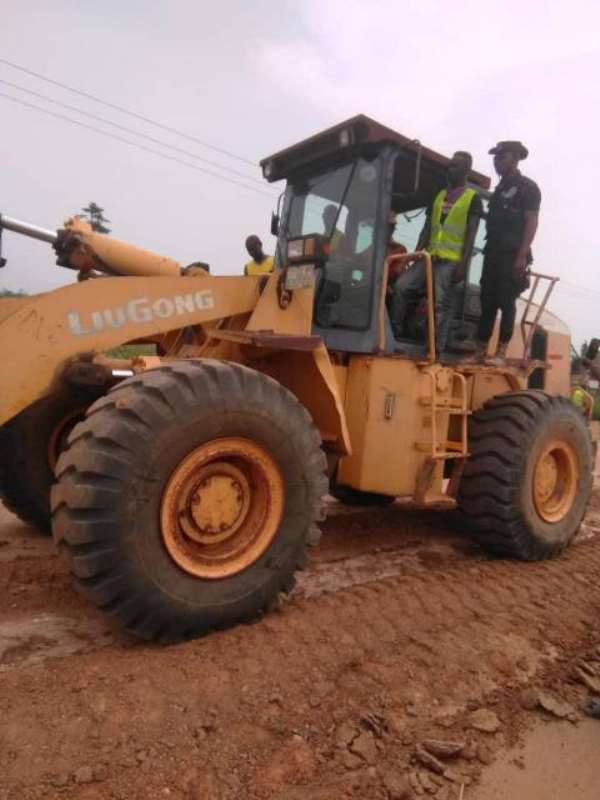 Professor Kwesi Yankah, Minister of State in charge of Tertiary Education, has cut the sod for the reconstruction of the 26 kilometer trunk road from Awutu-Bawjiase to Agona Swedru.

The ceremony was greeted with massive jubilation by people living in 30 towns along the road knowing it would enhance the trading and marketing activities in the area.

Addressing the media, Prof Yankah said, successive governments have failed to construct the road which has deteriorated over the years.

He said the reconstruction of the road would bring a huge economic boost through trading and marketing between Awutu-Bawjiase and Agona Swedru.

It would also bring relief to commuters and drivers.

Professor Yankah said government has kept it promise of constructing and tarring the Awutu-Bawjiase and Agona Swedru road to facilitate the transportation of goods and services.

The Minister said the first phase of the contract being executed by the Chinese Railways No 5 Ghana Engineering Limited would start from Swedru to AgonaKwanyako/ Mankrong-Junction stretch.

The second phase would start immediately after the first is completed.

Professor Yankah said on completion, the project would ease the difficulties farmers experience in sending their produce to Awutu Bawjiase, one of the oldest and biggest market centers in the Central Region.

He said beyond Awutu-Bawjiase, another firm is constructing the road to Adeiso in the Eastern region to facilitate easy trading and commercial activities.

The Minister of State said the reconstruction of the road was not important only for trading and marketing activities, but also vital for education due to a number of Secondary schools along the road.

He said more than 200, 000 people were going to enjoy smooth commuting to facilitate development.

Mr Dennis Armah-Frempong, Agona East Distrtict Chief Executive (DCE), expressed gratitude to the government for the project which would pass through Awutu/ Bawjiase/Agona Swedru, Mankrong-Junction, Agona Kwanyako and Agona Asafo all in the Agona East District.

He said the commencement of the road project has come at the right time and had also put final stop to the series of complaints by transport Unions plying the road.

The DCE said the drivers have over the years been complaining of frequent breakdown of their vehicles and appealed to officers of transport unions to advise drivers plying the road to exercise restraints to enable the contractors to complete the project on schedule.

At Swedru Senior High School (SWESCO), Professor Kwesi Yankah cut the sod for the asphalting of the 0.7 kilometer campus road to aid transporting.

He said the road to SWESCO was constructed when the school was built by former President, Dr Kwame Nkrumah some 61 years ago but had not seen any rehabilitation.

The Government under President Akufo-Addo pledged to reshape the road and it will be done, he assured.

Prof Yankah said the asphalt of the SWESCO road is being done in strong collaboration with the old students Association of the school who were contributing significantly to development of the school.