By Nina Larson and Robin Millard with Jurgen Hecker in Paris 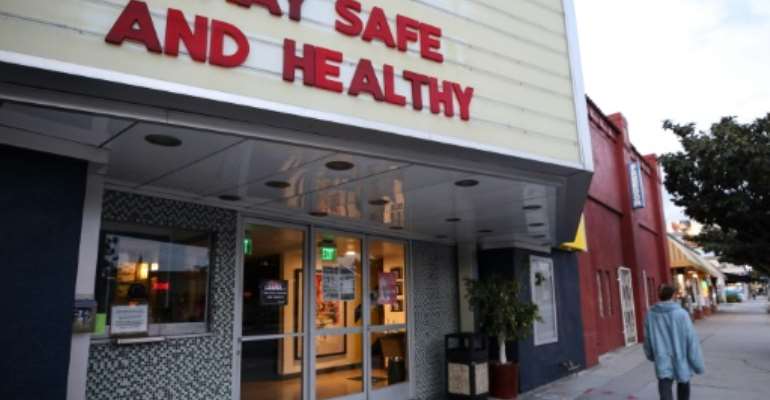 California, among the worst hit in the country, has told its 40 million residents to stay at home, the most drastic move yet in the United States. By MARIO TAMA (GETTY IMAGES NORTH AMERICA/AFP)

Italy reported a dramatic surge in coronavirus deaths on Friday as the pandemic spread further across the planet, but Wuhan in China reported no new cases, sparking a glimmer of hope.

Worldwide fatalities from the pandemic swept past 10,000, with the number of infected people topping 250,000, according to an AFP tally.

Italy, already the worst-affected country in the world, added another 627 fatalities, taking its reported total past 4,000 despite government efforts to stem the pandemic's spread.

The nation of 60 million now accounts for 36.6 percent of the world's coronavirus deaths.

Governments and central banks continued to throw unprecedented sums of money into the economic battle, hoping against hope that a deep global recession could somehow be dodged.

In a rare incident of encouraging news Wuhan, the Chinese city where the new coronavirus first emerged in December, reported no new cases in 24 hours.

'Hope for rest of world'

"Wuhan provides hope for the rest of the world that even the most severe situation can be turned around", World Health Organization chief Tedros Adhanom Ghebreyesus told a virtual news conference.

But hours earlier California, among the worst hit state in the United States, told its 40 million residents to stay at home, the most drastic move yet in the US.

The California measures will, however, not be enforced by police unlike in France, Italy, Spain and other European countries where people face fines if they break the rules.

Britain, meanwhile, ditched its more relaxed attitude on Friday, telling cafes, pubs, bars, restaurants, nightclubs, theatres and leisure centres to close, in line with its neighbours in the EU.

Germany's biggest state Bavaria on Friday became the first region in the country to order a lockdown, imposing "fundamental restrictions" on going out for two weeks.

Graphic showing largest number of daily cases of COVID-19 from March 13 to 19. By (AFP)

The strict measures follow the template set by China, as a lockdown imposed in Hubei province where the virus first emerged appeared to have paid off.

Italy, which has seen more than 1,500 fatalities in the past three days alone, has now recorded the five highest one-day tolls officially registered around the world and a total of 4,032.

China's death count was steady at 3,248, according to the AFP tally of official data.

Europe now accounts for more than half of the fatalities linked to the COVID-19 disease around the world.

However, accurate figures are difficult to come by as many of those who die are suffering from other illnesses and infection rates are uncertain because of a lack of testing in many countries.

The pandemic has sparked fears of a global recession, battering the world's stock markets and prompting governments to push huge spending plans to limit the damage.

The central banks of the United States, Japan Britain, Canada and Switzerland joined forces on Friday in announcing a new effort to keep dollars pumping through the world economy.

The US, meanwhile, is showing signs that it is ramping up efforts on all fronts, fast-tracking antimalarial drugs for use against the virus, halting all routine visa services at embassies and promising a $1-trillion emergency relief package.

The US package -- coupled with a European Central Bank plan to buy 750 billion euros in bonds -- saw stock markets across Asia and Europe rebound in Friday trading, but US exchanges were lower.

US President Donald Trump, who has come under fire for his response to the crisis, said on Thursday that US officials would make antimalarials chloroquine and hydroxychloroquine available "almost immediately".

Experts are divided over whether the drugs are suitable though, having undergone only the briefest of clinical trials.

Trump also sparked an international row after he accused the Chinese of being secretive over the initial spread and severity of the virus, saying the world was now "paying a big price".

Across Europe, governments continued to rigorously enforce lockdown measures as the continent's most celebrated boulevards and squares remained silent and empty even as warmer spring weather arrived.

France announced more than 4,000 people were fined on the first day of its confinement and ministers branded those breaking the rules as "idiots".

France and Italy have both said they are likely extend the confinement beyond the initial periods, and British schools will close indefinitely on Friday.

Technology companies have begun to hint at the strain being put on their systems.

Both Netflix and YouTube, which say they have experienced a surge in demand since lockdowns began, have promised to reduce the default image quality of streaming video in Europe to ease pressure on the internet.

However, the restrictions are bringing some communities closer together.

In sparsely populated rural Spain -- a country that ranks fourth in the world for coronavirus infections -- neighbours are pulling together to help the old and the vulnerable.

Sergio Caminero, 30, who lives in Lovingos, a tiny hamlet north of Madrid, went to pick up some shopping for an elderly neighbour.

"She's older and is quite frightened and tense," he told AFP.

The shadow of the virus is lengthening across Africa and the Middle East too.

Gabon confirmed sub-Saharan Africa's second known death on Friday, with the total of reported cases across Africa standing at more than 900 and rising fast after lagging other continents.

In Iran, both supreme leader Ayatollah Ali Khamenei and President Hassan Rouhani promised the country would overcome the outbreak -- but still refused to join the rest of the world in imposing heavy restrictions.

The global sporting calendar, shredded by the spread of the pandemic, still has one major event coming up that has not yet been called off -- the Olympic Games, set to take place in Japan in the summer.