By Susan NJANJI and African bureaux 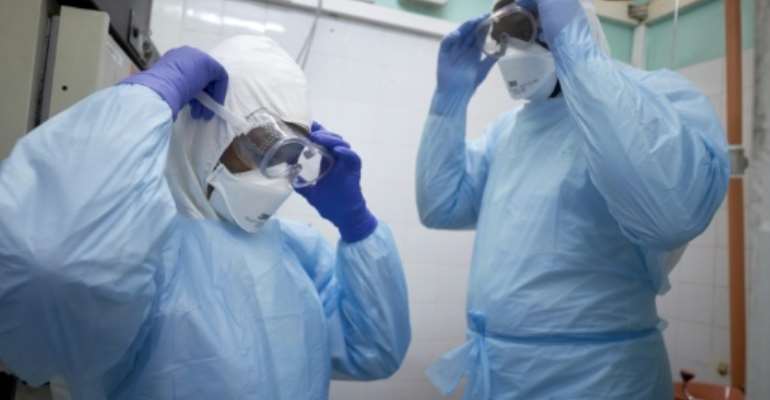 Malian researchers get suited up to conduct a coronavirus test at a lab in Bamako. By MICHELE CATTANI (AFP)

Sub-Saharan Africa recorded its second coronavirus death on Friday as infections rose in South Africa, where the government warned bluntly of a long haul in the fight against the disease.

Despite stringent restrictions ranging from flight bans to school closures, countries south of the Sahara have recorded two deaths in three days, and the case tally on Friday had more than tripled in the space of a week.

The central African state of Gabon announced its first fatality from coronavirus -- a 50-year-old man, whose death followed that of a 62-year-old woman in Burkina Faso on Wednesday. Both had diabetes.

The total of known cases across all of Africa, compiled by AFP, stands at more than 900 and is rising fast after lagging other continents.

Health experts have issued loud warnings, for most African countries are desperately short of intensive-care units, equipment and trained staff. The Sahel state of Mali has just a single respirator.

Ballooning from one case two weeks ago to 202 on Friday, South Africa has the highest numbers in the subcontinent.

Health Minister Zweli Mkhize pointed to established scientific projections showing that infections "ultimately can affect up to 60 percent of the population."

The virus is "going to be with us for quite a while," he warned. 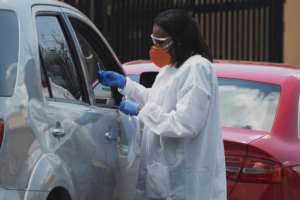 South Africa has started drive-through tests for the coronavirus, but the high cost -- more than $50 -- is beyond the means of most people. By MARCO LONGARI (AFP)

"It's a reality we must face, but it's not a reality that says we now face an apocalypse."

One of the flights was an Air China plane that landed at Johannesburg's O.R. Tambo International Airport from Shenzhen.

Only South Africans were allowed to disembark while 68 Chinese nationals were refused permission to leave the aircraft.

The country's flag carrier, South African Airways, suspended all regional and international flights until the end of May in line with government-imposed travel bans aimed at curbing the spread of the virus.

South Africa has adopted slew of other measures, including banning gatherings of more than 100 people, shutting schools, and suspending major cultural and sporting events.

Restaurants are limited to less than 50 people at time, no alcohol can be served after 6pm, while peddling of fake news will attract a six-month jail term.

At the Zawiyat Sofwat El-Islam mosque, in a rundown part of the city, religious leaders struggled to restrict numbers gathered outside -- eventually the gates were flung open and around a thousand worshippers entered. 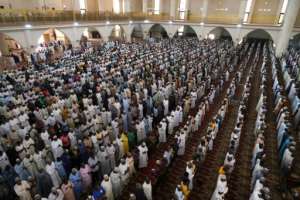 The service proceeded swiftly, lasting less than 30 minutes. The chief imam announced the cancellation of a special Sunday service and directed the faithful to observe it in their homes.

"I am here despite coronavirus to offer prayers to God. The Almighty Allah is the giver and taker of life. We should all pray and ask Him to take this strange disease from the world," said Alhaja Basirat Okeowo.

Health officials in Lagos meanwhile reported cases of poisoning by chloroquine caused by self-medication, after US President Donald Trump touted the anti-malarial drug as a potential treatment for the virus.

In East Africa, Kenya, which has announced no new cases in two days, scaled up measures, ordering bars to shut by 7:30pm from Monday.

Supermarkets are being urged to limit numbers of shoppers, implement queue management, open for 24 hours and offer delivery services.

"Our actions this coming week... will determine whether we shall go into a full blown crisis with grave human and economic consequences, or whether we shall limit the adverse impacts of this disease, save lives and reduce the impact to our economy," said Health Minister Mutahi Kagwe.

Uganda, host to some 1.4 million asylum seekers, has blocked entry to further arrivals over the next 30 days.

In the Democratic Republic of Congo, a sprawling country the size of continental western Europe, 18 cases were reported as of Friday, all of them in the capital Kinshasa, a rise of four over Thursday.

DRC music stars Fally Ipupa and Koffi Olomide on Friday posted videos on Twitter urging the public not to exchange kisses and handshakes and to wash their hands.