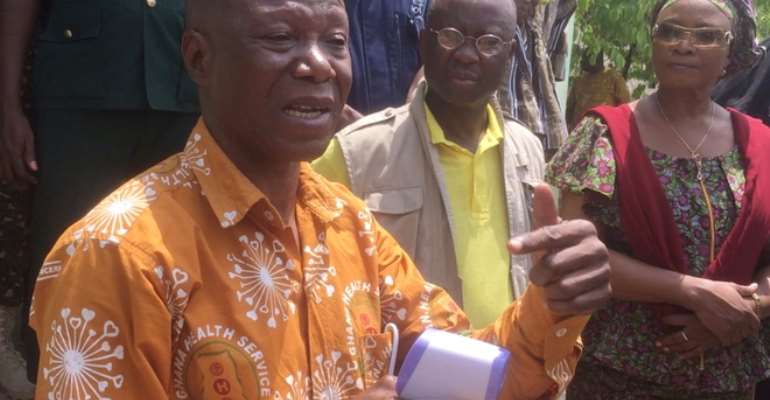 Immigration officers at the Chache Border in the Bole District of the newly created Savannah Region are living in fear in the wake of the outbreak of the deadly Coronavirus due to the lack of Personal Protection Equipment (PPEs).

Among other things, the officers bemoaned the lack of PPEs coupled with the unavailability of port health stationed at the border to help screen visitors, adding that, 'they are living in dangerous times.

They made this known when the Savannah Regional Minister, Hon. Salifu Adam Braimah, paid a working visit to the area to ascertain for himself measures being put in place at the border to prevent the spread of the virus.

It can be reported that, at the time of the visit, only a hand sanitizer and some already used nose masks were available at the border for staff and visitors.

Chache Border in Bole is one of the points of entry into Ghana from neighboring Ivory-Coast with the other one being Saru Border in the Sawla-Tuna-Kalba District, all in the Savannah Region.

The District Health Director, Mr. David Bakari disclosed that the lack of funds to train staff and deploy logistics explains why they have not been able to station health workers at the border to screen visitors.

According to him, even though the president of the Republic announced measures to be implemented at every level to curtail the spread of the deadly virus, the district was yet to be equipped with the necessary resources and health consumables.

He further stated that his outfit has submitted a budget to the district assembly for the release of funds to carry out their planned activities in-line with the president's pronouncement.

The Regional Minister presented two infrared thermometers to the border officers to enhance the screening of visitors, whilst assuring that, the Soru and Chache borders will be well equipped in the shortest possible time to handle a potential outbreak of the virus.

He later inspected a proposed site for the construction of a holding room and an accommodation facility for health workers and assured the district of his full support in these trying times.

The minister earlier on paid a similar visit to the Mole National Park, which is one of the most patronized tourist sites in Ghana by foreigners to ascertain the extent of their preparedness to combat the COVID-19.

Ever since the outbreak of the virus, many residents have called on authorities to close down the park temporally, since it's a potential source of spread of the virus.

So far, Ghana has recorded 16 confirmed cases of the deadly Coronavirus.

President Akufo-Addo as part of measures to curtail the spread of the virus announced a ban on public gathering such as religious service, funerals; closure of schools; travel restrictions for people coming from countries that had recorded 200 or more confirmed cases of COVID-19; designated isolation and treatment centres at some health facilities, screening of travelers with thermal scanners at the country’s points of entry, among others.

According to the World Health Organisation (WHO), the deadly virus has claimed 8,988 lives with 220,843 persons infected globally.