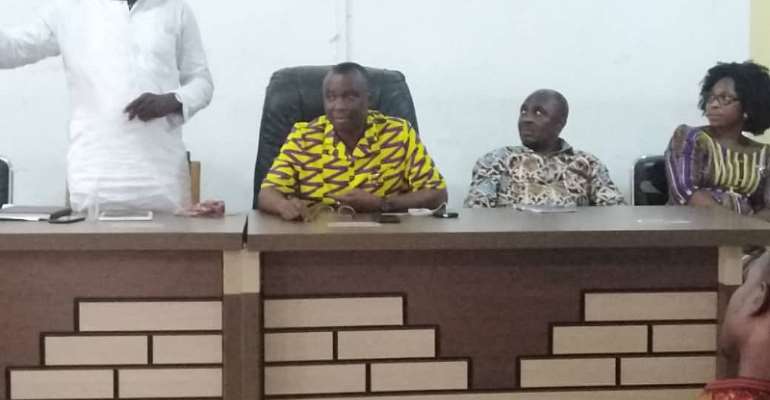 The East Gonja Municipal Security Committee (MUSEC) has met with various stakeholders in Salaga to deliberate on measures to ensure the Municipality record no case of Corona Virus.

They identified education on personal hygiene and strict adherence to available preventive protocols as ways of safeguarding one from contracting the virus.

At a meeting in Salaga which was well attended by the clergy, Imams, Businessmen and women, representatives of some political parties and the media.

In his opening remarks, the Municipal Chief Executive for East Gonja, Mohammed Tamimu encouraged patrons to show more commitment in this trying moment.

He is optimistic rigorous education will remind residents on how to stay safe.

"This is an emergency situation. Let's not pretend it won't get here soon because one can not tell who has it"

He revealed the Assembly is working with the Municipal Health Directorate to procure some Personal Protective Equipment (PPEs) to position health professionals to do a good job.

He also mentioned, the Assembly will as soon as possible release some resources and logistics for the education and the procurement of other relevant materials for the prevention processes.

The Municipal Health Director, Gertrude Yentumi assured the patrons of the preparedness of the directorate to deal with the pandemic.

She, however, appealed to the Assembly to fast track the release of resources in order to get the needed materials not only for the Salaga hospital but other facilities across the Municipality.

She seized the opportunity to educate patrons on the pandemic.

The Savannah Regional Minister and MP for Salaga South Constituency Adam Salifu Braimah who was in the Municipality to donate some Infrared Thermometers to the Salaga Government Hospital appealed for the cooperation of all in the fight.

He was optimistic Salaga will not record a case but was quick to add it will depend on how serious people adhere to basic hygienic principles.

"God will protect us to overcome, but let's continue the fight" he assured.

Some prayers were said for the Municipality, the Region and the Nation.

President Akuffo Addo in a televised address to the Nation on the pandemic on Sunday, March 17 among other things announced that Ghana is stepping up efforts to deal with the pandemic.

So far, 16 people have tested positive of the virus.

Shatta Wale is missing, no where to be found – Father
4 minutes ago